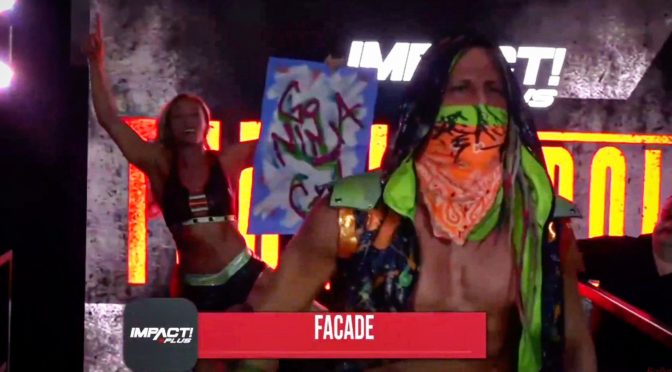 Facade impressed a whole new fanbase with IMPACT’s weekend trip through Pennsylvania, and if IMPACT Wrestling was smart, they’d sign him immediately.

Facade has been around for a while and a name I’ve been familiar with since the Extreme Rising “November to Remember” event.  He lost to the son of Damien 666, Besita 666. I remember thinking how cool this cat was, a combination of Jeff Hardy and Christian York, with a flare of unique all his own.

Since he’s worked just about everywhere but has yet to be picked up full time by someone. Hopefully, that changes after this past weekends event on Twitch and IMPACT Plus, with Pennsylvania Premier Wrestling. Facade stole the show, hitting several huge top rope moves that awed the crowds, and got fans hyped.

His unique style, athletism, and daredevil mentality have made him a darling on the indy scene. He’s developed a look and personal style that while looks familiar, is wholly unique. He’s the Aerosol Assassin and the Neon Ninja, nicknames that highlight his street-tagging ways. He enters with a ninja-style mask and while he doesn’t wrestle in it, his overall look compliments the name well.

While it’s hard to track down his exact age, he has to be at least in his early 30’s and with his style, this is the time for someone to scoop him up. In an era where everyone and their stuffed dogs are doing moves similar to his, it’s hard to stand out but that’s exactly what Facade has done. He’s crafted a look and a vibe all his own that only a few in the whole industry has.

He’s flanked by his girlfriend Dani Mo, who not only serves as his valet but as a wrestler as well. The two of them together could be a pure rush of positivity and excitement if they were brought in. While the focus has been solely on Facade, Dani Mo offers something unique in her own right in a division that’s devoid of anyone that looks like her.

These two together, backed by Facade’s ninja-dynamic, could be the type of positive faces that the wrestling industry needs. Not to mention with the likes of Jeff Hardy winding down, the artistic mad man slot is open to the next one up. Is the next one Facade? Maybe, but we’ll only know if IMPACT Wrestling gives him a chance.