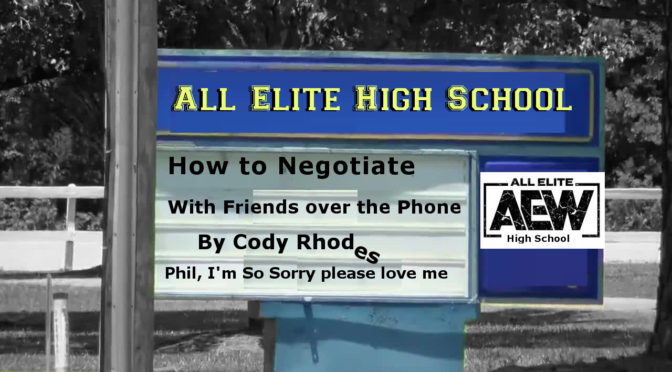 CM Punk isn’t pulling punches and by the sound of it, he’s done with AEW piggy backing off of his name.  When talking to ESPN he revealed that he’s in a no-win position every time someone from AEW reaches out to him.  He’s quoted as saying;

The last thing I got — I got a text from Cody [Rhodes]. And again, I almost don’t even know how to reply to them sometimes, because if I reply, they do interviews and are like, “Oh yeah, I just talked to Punk.” I’m kind of damned if I do, damned if I don’t. I always think if somebody wants to do business with me, they can come talk to me. Texting offers isn’t really a way to do good business, at least.

….It was texted through three people and an offer came in through text. This is like a month ago, maybe.”

The whole comment makes AEW look bush league and unprofessional to say the least.  Texting offers?  Cody Rhodes was not too far from this story whoever as he responded on Twitter saying;

I think he was misquoted. I know 1 of us had met with him in person, and yes I texted him plenty when we couldn’t connect on the actual phone, but not a contracted offer. I wouldn’t be surprised if he went back to wwe. Regardless, great wrestler & guy. Door is open if he wants it https://t.co/3ityuurGGy

There’s been some debate for a long time about ‘The Boys’ running AEW.  Cody, his wife Brandi Rhodes, Kenny Omega, and The Young Bucks are all some sort of authority in the promotion and as such are booking from a place of a duel standing.  They’re not just putting the brand and the talent forward, but themselves as well.  Not an easy balancing act to do.

For Cody to immediately write off the reporter as being bad at his job, and accusing him of being the reason the article painted Cody and Company in a negative light is pretty sad.  He’s in a no win situation.  Either he is that sad as an exec that he texted an offer, or CM Punk is lying, or the ESPN journalist is bad at their job.  There is no good way to spin this for Cody.

You can’t talk about how important the wrestling media is, inviting them to all the events, talking to the mall the time like they’re your boys and then bury them when you deem fit.

This is the issue with #1) teasing talent who aren’t signed and #2) what happens when those who have no experience are given too much responsibility too soon.  I have no doubt Cody can learn but this isn’t the first mistake they’ve made as a brand.  Whether it’s Brandi Rhodes for weeks purposely misleading fans by saying the women will get ‘equal pay’ as the men (before clarifying saying they’ll get equal entry level pay), to booking things so badly that PAC up and pulled out of Double or Nothing.  AEW has some growing pains.

Do I think they’re dead in the water?  No, not at all.  Do I think Cody Rhodes is bad at his job and just quit? No, he’ll learn.  Hopefully.  It is needed though to point out that Cody Rhodes fucked up this CM Punk deal, and in trying to pull himself out of the pit threw just about everyone else under the bus.