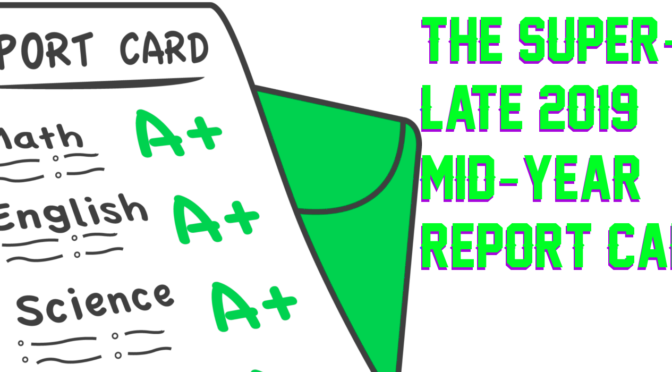 I’d like to say that I ‘waited until Slammiversary ended so I could have a better idea what the mid year will…blah blah blah’.  I forgot people.  Sorry.

This is being done in the midst of the G1 but as it’s an ongoing tournament, no results from that will be factored into overall standings.  Increased lineup this year, as I’ll be including NJPW, ROH, IMPACT, WWE, AEW and MLW into this years list.   The list is a combined grading of performances, diversity of talent (in ring, on mic, creativity etc), match bookings, championship wins, and overall presecene in not just their company but wrestling as well.  For that reason other companies may see their talent on this list when they themselves are not necessarily considered, and also why certain talent from major companies won’t even make the list.

Not every talent deserves to be graded.

So let’s get started.

They Get an ‘A’
– Let’s start with IMPACT’s LAX, dominating the tag team scene and main eventing a pay per view (which doesn’t happen anymore with tag teams) has them as the top tandem going.  Tessa Blanchard beat Gail Kim, and raised her game against Sami Callihan.   Kazuchika Okada is back at the top of the hill in NJPW.  Only a few months since he left but Jon Moxley is already at the top of his game once again.  He’s again the top of the division and trying to cross weight classes so the best bout machine in NJPW, Will Osprey, gets in.  Zach Sabre Jr is the best submission grappler in the world, and one of the names many are focusing on for the G1.   Despite a lack luster title run, you can’t take away how good of a moment Kofi Kingston‘s title win was.

The NWA signing of Eli Drake, despite not winning any major titles this year was a huge coup.  Reigning NWA World Champion Nick Aldis continues to show the world why ROH needed him and NWA’s star power so much.  CHIKARA’s in good hands with the now villainous Dasher Hatfield as Grand Champion.  The former champion Mr. Touchdown helped raise his game thanks to his feud with the aforementioned champion.  ROH’s signing light is Jeff Cobb and he’s mostly just worried about NJPW now.  As the face of WOH division in ROH, Kelly Klein continues to impress.  A stand out in CMLL, ROH and NJPW makes Dragon Lee must see t.v. – plus he wins a lot of gold.  Despite a short title reign, Hiroshi Tanahashi did in fact win the IWGP Heavyweight title this year and that ain’t nothing.  Juice Robinson is near the top of his G1 Block and is now a former 2x United States Champion for NJPW.  Despite his tag team being over, SANADA continues to impress with title reigns and top bouts.  From Dragon Gate to NJPW, Shingo Takagi is taking heads and making beds.  I don’t know what that was, but go with it.  Taiji Ishimori won the IWGP Jr. Heavyweight Championship and has been one of NJPW’s best in the division.  We all know Tama Tonga is a future Heavyweight Champion.  Or should be.   The IWGP Intercontinental Champion Tetsuya Naito continues to impress.  Tomohiro Ishii makes the NEVER Openweight Title a belt you have to respect.  Tom Lawlor won the MLW World title.  MJF isn’t a big title guy yet but he’s so good on the mic.  Adam Page is a good worker though his stock as a top draw is in doubt.  Cody Rhodes hasn’t won any major titles and continues to prove that wrestlers shouldn’t be running companies.  Pentagon and Fenix should be World Champs but are settling for tag team gold.  Awesome Kong came out of retirement in a big way.  Brian Cage was X-Division Champion and World Champion in the same calendar year; but he’s been too hurt to warrant an ‘A’.  Sami Callihan is a great draw for IMPACT but his attitude have made him hard to put a belt on.  The Rascalz are fun though they’re not champs yet.  The North are dominant but still fairly new.  Rich Swann was a great X-Division Champion while he lasted.  Despite being several steps slower than he was, AJ Styles still warrants a ‘B’.  The Miz continues to win titles and feud at the top of the card despite not winning another world title yet.  Ronda Rousey was a good champ and main evented WreslteMania, though it was unspectacular.  The New Day’s Big E and Xavier Woods continue to win tag gold but neither have broken out past the New Day gimmick.  Daniel Bryan won the WWE Championship but did nothing with it or his new eco-warrior gimmick.  Finn Balor won the Intercontinental Championship but no one would blame you if you already don’t remember.

To expedite the process, a singular description will be given for the rest.

They Get a ‘C’ – Bigger names who failed to deliver, or younger stars who haven’t found their identity yet.

They Get a ‘D’ – Under performed in every way but have the talent to be better, just not much better.

They Get an ‘F’ – Resounding failure for one reason or another.  Either lack of consistency, poor in the ring or just a pain in the ass to deal with.

They Get an ‘Incomplete’ – Due to injuries or time off, did not log in enough time to warrant a grade.

Nominees of the Half-Year

News Story of the Mid Year
– Trish Stratus returns only to re-retire
– PAC Pulls out of major AEW match over refusal to lose.
– AEW Forms
– Roman Reigns returns to tv in remission.

Awards of the Mid-Year

Feud of the Mid-Year
– Sami Callihan vs. Tessa Blanchard

Non-Wrestler of the Mid-Year
– Johnny Bravo

Tag Team of the Mid-Year
– LAX

Comeback of the Mid-Year
– Roman Reigns

News Story of the Mid-Year
– Roman Reigns returns to wrestling in remission.