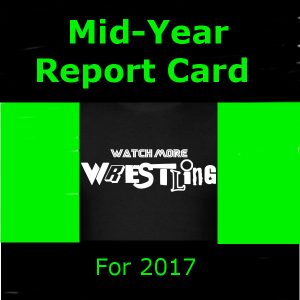 Ah it’s the mid-year report again. I’d give you links to previous ones but they…..they don’t exist. Now, our “year” is from the end of November to the end of November, so technically we’re past the mid-year in our evaluation cycle. Apologizes. Also, due to the volume of wrestlers looked at and graded, many who could and should warrant a spot aren’t on here.

Talents from New Japan-only aren’t graded unless they had truly spectacular years, as the availability for all NJPW shows is still severely limited in the states. Also, due to the long hiatus of Lucha Underground and the numerous episodes in between some stars appearing, I’ve ruled that L-U specific wrestlers won’t be evaluated either. Now if I’ve missed someone else from one of the three big American promotions, please let me know.

They Get an A
– (A+) Lashley is in the midst of his longing reign as Impact Wrestling Champion, and is about to become embedded firmly as the 2nd longest reigning champion in company history. Main evnenting Wreslte Kingdom as champion is no small feet, and Kazuchika Okada has a few amazing matches to his name to earn the A+. (A) Eddie Edwards and Christopher Daniels both won world titles despite not being expected to by many. Alexa Bliss became the first ever woman to win the RAW and SmackDown Women’s champion, and did it mere months apart in the same calendar year. (A-) Rosemary has been absolutely dominant as Knockouts champion, and is third all time in single reigns. Alberto El Patron has had several amazing matches with EC3 and Eli Drake, as well as winning world title gold in Impact, while on his way to main eventing Slammiversary XV.

They Get a B
– (B+) LAX wins two sets of titles in Impact Wrestling, while reestablishing the LAX brand. Not being in many great matches, but The Miz held gold this year and was in several high profile feuds. Having amazing matches will help a lack of title wins, which explains both AJ Styles and Kenny Omega. The Hardy’s and Chris Jericho found the fountain of youth with title gold, and Kevin Owens held both the Universal and United States titles so far this year. (B) Braun Strowman was on fire before getting hurt. Magnus and Adam Cole were both champs at one point this year. Charlotte Flair has become the top sell for any women’s brand in the WWE. Brock Lesnar avenged Goldberg’s win, and won WWE gold. Naomi became the face of SmackDown, for a few weeks (B-) Davey Richards came back from injury as good as ever. Ethan Carter III raised his in ring action to a new level. Winning his fifth X-Division championship put Low Ki where he is. Dominance and title wins has Sienna as a star on the rise. Dalton Castle was so close to winning the ROH World Title. Dominance in Japan has War Machine looking good. The Young Bucks remain a draw, despite not really doing anything new. Dean Ambrose won the Intercontinental title, and Roman Reigns had a subpar match with The Undertaker at his last WrestleMania. Bayley’s title win is helping cover up the fact she’s not being as embraced as she was on NXT.

They Get a C
– (C+) Moose is still looking for his Grand Championship defining feud, as is Marty Scurl for the ROH Television title. Randy Orton is struggling to have great matches despite being a recent WWE Champ. Cody Rhodes continues to impress but isn’t defining his career on the indies. A surprise WWE title win helped Jinder Mahal a bit. Winner of the Andre the Giant Memorial Battle Royal Trophy and best friends with New England Patriot Gronk has Mojo Rawley here. Fans love Tye Dillinger but I don’t know why. He was off t.v. for a long time, and then Shinsuke Nakamura debuted to a lackluster performance at Backlash 2017. Matt Sydal competed for gold in both Impact and ROH not far apart. She returned to Impact but Christian Von Eerie lost her belt in her second match. Winning a six man title has Bully Ray on the rise, as well as with his partners The Briscoes. Trevor Lee was X-Division Champion but couldn’t overcome Low Ki. (C) He won the ROH World Title but then Kyle O’Reily disappeared from the public eye working non-televised events. Sasha Banks is losing to Alicia Fox. Cesaro has been dragged down by Sheamus. Neville can’t raise the Cruiserweight division or 205Live on his own. Baron Corbin and Luke Harper are floating around the mid card scene. Becky Lynch is now playing third fiddle on SmackDown. Abyss/Joseph Park is in a major angle for Slammiversary XV. Eli Drake talks better than anyone but needs some more title wins. Garza Jr and Laredo Kid have been fun to watch. James Storm has a burning fire again but isn’t winning world titles. Alex Shelley and Chris Sabin are spinning their wheels. Caprice Coleman deserves more to do. Hangman Page is still finding himself. Jay Lethal is a mid carder right now. Kenny King’s best bump was on a reality show. Rhett Titus hangs out with Caprice Coleman. (C-) Ropongi Vice and Will Ospreay have great matches but aren’t winning many top titles. Seth Rollins is as charismatic as a wet rag. Bray Wyatt has been exposed as being a less than stellar worker. Andrew Everett cant beat Trevor Lee. Braxton Sutter is less popular than his valet Allie. Angelina Love is back to her winning ways after a long layoff, which her her position.

They Get a D
– (D+) Nia Jax is just the Big Show of the Women’s division, much like Big Show is to the WWE. Big Cass lost all of his momentum because of bad booking. Goldust just again became relevant. Winning gold can’t help the fact The Club are being overlooked. R-Truth is all by himself now. Losing in the opening of WrestleMani’a pre-show isn’t helping Austin Aries at all. She’s had more wins as of late but Dana Brooke is still struggling. You can spell ‘jobber’ with Mickie James name now. Where have The New Day been you ask – On the shelf because of Kofi’s injury. Dolph Ziggler shows the world how much he loses. Despite a few good weeks The Fashion Police have been struggling all year. Remember American Alpha? The The Uso’s aren’t as over as the WWE wishes they were. John Cena doesn’t get a pass for doing the same things he ripped The Rock for. She’s great but Natalya is nobody in today’s WWE. Bram got suspended and kicked off a major NOAH/Impact tour. He’s fun to watch but Caleb Conley eats pins. Fallah Bahh and Mario Bokara have upside, maybe. Grado is the center piece of the World of Sport revival for Impact. Don’t call KM a liar. Kingston‘s on the shelf after a long run of losses. Robbie E went to Japan and didn’t perform well in the Tag League tournament for NOAH. Tyrus is an imposing force for Bruce Pritchard and Eli Drake. Still finding her feet is why Brandi Rhodes is here. No better character than Laurel Van Ness but wins matter. Madison Rayne is the new Christie Hemme. ODB is Impact’s Mickie James. Frankie Kazarian is an afterthought and The Kingdom have struggled.

They Get an F
– Jessie Godderz is filming his soap operas. Apollo Crews, Bo Dallas, Curt Hawkins and Curtis Axel are just in the WWE to lose apparenlty. Enzo Amore‘s poorly booked storylines lead him to fall off the radar. Heath Slater is watching his 3MB teammates do a lot better than he is. Kalisto likes to play in trash. Yes, Mark Henry’s not retired yet. Rhyno is losing more than just in the ring these days. WWE has nothing for Titus O’Neil. They’re an entire division but The Cruiserweights may actually kill a show. Winning two matches over Banks isn’t enough for Alicia Fox to get a better grade. Emma and Paige are hurt and annoying WWE officials. Being alone won’t help Aiden English. The Colon’s are in the same spot as James Ellsworth and The Ascension. He’s super popular but Sami Zayn is barely seen as more than a jobber these days. Sin Cara has a new suit, that’s something. Carmella is paired with Ellsworth, Eva Marie is no longer interested in wrestling, and Nikki Bella‘s career highlight is now being John Cena’s wife. Aiden O’Shea has been squandered, Marshae Rockett loses all the time.

They Get an Incomplete
– Reno Scum was on fire before getting hurt. Injuries limited Finn Balor. Darren Young got a great grade compared to where he would of been. The Revival was on their way to winning gold. Where’s Summer Rae?, Erick Rowan had some injuries. A mayoral race is keeping Kane away. Rusev has been hurt, and The Singhs got hut. Zack Ryder has problems with getting healthy. Tamina just came back. Debuting in Impact, Chris Adonis has some hope. DJZ was seriously injured in Mexico. Homicide’s nothing more than a glorified manager now. Matt Morgan came back from a long hiatus. Veterans of War is new, but Wilcox was having a solid run in the indies prior. Rockstar Spud has bounced around a lot. Being back in Impact will help Sonjay Dutt. Colt Cabana is mostly an announcer now. Dezmond Xavier, Diamnte, Eva Story, MJ Jenkins, Idris Abraham are all too new to be fairly graded. The Undertaker wrestled one match and it was awful.

Nominees of the Half-Year

Awards of the Half-Year

News Story of the Year
– Anthem purchases TNA and Starts the Rebuilding Process, as well as brings Jeff Jarrett back home.