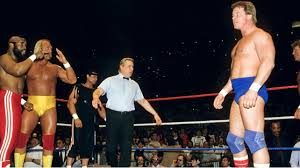 I started a rebooking of the WrestleMania’s but due to our restart, we lost all of that content. So we’re re-doing it. That means that I have the opportunity to fix it even more. Find the right pairings and the right outcomes. So that’s what I’ve done.

WrestleMania is always considered the biggest show of the year, but very rarely is it the best show of the year. The card never lives up to the hype, yet fans flock to it. So we’re going for “iconic” and “momentous” and not….whatever the WWE tried to do. Vince constantly believes his guys are the biggest and baddest, but it’s often times not true. Terry Funk was in a throw away tag match at WrestleMania II for crying out loud. So we’re rectifying it. Rectifying all of it!

So here’s the original and shitty lineup.

David Sammartino (with Bruno) vs. Brutus Beefcake (with Johnny Valiant)

World Tag Team
Nikolia Volkoff and Shiek vs. The US Express (Rotundo and Windham) (c)

Andre the Giant vs. Big John Studd (with Heenan)

Mr. T and Hogan (with Jimmy Snuka) vs. Piper and Orndorff (with Bob Orton)

The show as a whole failed because of bad pairings. The talents weren’t great to begin with, but at least they had *some* names worth checking out. Another big issue was the lack of storylines and proper feuds so we’re going to change all that.

Firstly, the JYD is super popular. if you want to use him, have him entertain and do his thing and give him someone he can beat. That would be Big John Studd. He can bump for a big guy, but he can also eat a clean loss for the JYD.

Playboy Buddy Rose was at the end of his run as a draw but he should at least be utilized with his more known name. Andre was a face, and nearing the end, so why not put him with a younger heel that would benefit from a big win. The tag team title match was fine, so we’ll keep that just move it earlier in the show.

I love the idea of the Intercontinental Championship match being Steamboat vs. Santana, because come on. Those two would kill it. Sammartino taking on Bundy is a great idea for a young up and coming face, taking on the giant heelish monster that was Bundy. You can use Bundy as a dominating force that pushes around Sammartino.

The women’s title match is fine, just give it more time. And we take Hogan out of the tag team match but still feature Mr. T and Roddy Piper. Then, in the main event, whether there’s many who’d think they’d work together well or not is irrelevant; Bruno vs. Hulk.

It’d put Hulk over hard, the old hand of the WWE doing the job for Hogan the way others did for Bruno. It may not be a great match, but it’d be better than most of the WrestleMania matches he was in.

Andre the Giant vs. Greg Valentine

Details:
So now lets go through the matches. We start with the opener, JYD hits two THUMPs onto Studd to get the win. Pots match though sees Studd throw JYD into the crowd and beats on him until the security breaks it up.

Shiek and Volkoff still win the WWE World Tag Team titles form the U.S. Express, and then call out Hulk Hogan backstage, and starts building to a tag team run in the summer with Hogan and Snuka taking on the foreign heels.

To up the ante some, the Intercontinental Championship stays on Tito Santana instead of him dropping it to Valentine. Santana then accepts a challenge from Ricky Steamboat. Both men wrestle a clean, high flying match, that sees Steamboat get caught by Santana on a crossbody, but Steamboat reveres the reversal and gets the three count for the win and the championship.

Bundy would of spent months picking on smaller wrestlers and even sets his eyes on David Sammartino. David though stands up to Bundy and goes after him one night after Bundy bullies a smaller jobber. During the match, David is able to hit some dropkicks and clotheslines on Bundy but Bundy ultimately out lasts David’s onslaught. As Bundy gets ready to hit the splash, David moves out and rolls up a stunned Bundy for the win. Bundy goes nuts post match as David slinks away.

If I could erase Snuka from existence, I would. But I’m dealing with what would be avalible to me in 1985, which means I’m handcuffed as to what I can do, and who I can use. So Snuka pairing up with Mr. T works because Snuka was still incredibly popular. The match goes similar to the original, only sub Snuka in for Hogan. Orton still goes off the top to hit Mr. T with the cast, but misses and hits Orndorff instead, which allows Mr. T to get the pin as Snuka throws Orton over the top rope and into Piper.

For the main event, Bruno comes back months prior. Vince McMahon and company promote him as the Babe Ruth of the WWE returning to the company. Bruno’s first match will be against Tito Santana for the Intercontinental Championship, but Valentine will cost Bruno the title after he interferes. So Bruno gets all hot and bothered and lambasts Jack Tunney for allowing this type of mockery to go on in the company. Bruno claims if this is how the WWE is now, he’ll show the world just how things can be. With that, he attacks Hulk Hogan after a title defense, which launches the feud.

The main event will see Bruno Sammartino and Hulk Hogan brawl for most of the match with Bruno attacking Hogan’s back and locking in the bear-hug for extended periods. Eventually Hogan fights back, hits the big boot and leg drop combo only for Bruno to kick out. The fight gets a bit more bloodied, but Hogan pulls Sammartino off the top rope and hits a second leg drop to retain the belt.