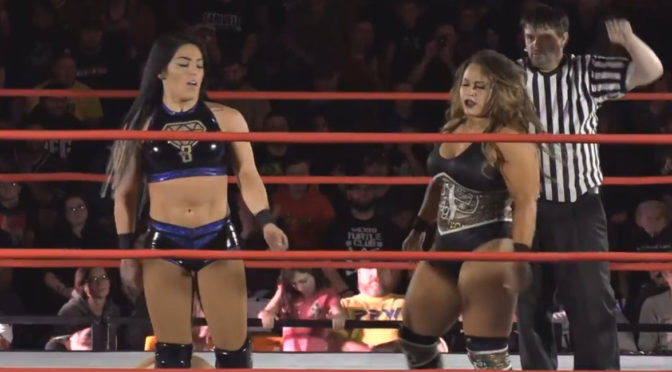 With the rise of the women on IMPACT Wrestling and a new era of female athlete upon us, it’s time for IMPACT to bring back the Knockout tag team titles.

Jordynne Grace and Tessa Blanchard are redefining the female athlete archetype in IMPACT Wrestling. Once a division dominated by the less-than-spectacular athletes such as Velvet Sky and Chelsea Green, the division now boasts two of the most impressive female wrestlers in the world.

Grace and Blanchard are easily the two top female talents in the company and together they make for a pretty damn impressive tag team. The duo just defeated Madison Rayne and Jessicka Havok at the Turning Point IMPACT Plus event.

With about a dozen women on the roster, working relationships with several promotions across the country and the ability to bring in talent for one-off appearances, the division can be as deep as ever without even needing to sign all the teams to exclusive deals. That alone makes this the perfect time to add the titles back to the company. The promotion is one of the few in wrestling that doesn’t have enough titles, carrying only four.

While you might get away with three for the men (four would be ideal), one for the women isn’t enough. The singles belt shouldn’t be thrown around all willy-nilly, and more than one woman at a time deserves to be adorned with gold. Having the tag titles back in the Knockouts division helps alleviate that.

The perfect two women are already on the roster to usher the belts back from obscurity. That being Blanchard and Grace. You could do it on a Twitch special, eight teams, seven matches, one winner. You would need to bring in about four extra women, but that just gives you an opportunity to showcase someone new. Maybe Ally Recks from PPW, or indy Icons Mercedes Martinez and Cheerleader Melissa? Maybe bring in two icons like Jacqueline Moore and Jazz or partner with SHINE or Shimmer. What about bringing in talent from Women of Wrestling?

Any of those possibilities work, and any of them would help make the belts feel important, special but most importantly relevant again. Name the event the Knockouts Grand Prix, and just let them go. These belts are important and still necessary to this day.