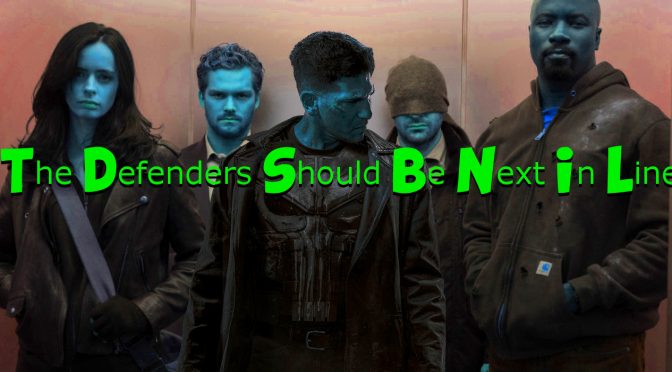 I don’t much talk about the Marvel Cinematic Universe.  I find the movies often dull or unoriginal.  They don’t captivate me they do others, even though most fans turn on the poorer films years later.  That’s another issue I have with the MCU, every movie is “the best” until it’s not.  It’s become a drinking game at this point.  Ever time a new MCU film comes out, it’s better than the original in the eyes of these fans.

Truthfully, there’s only about ten real watchable films in this franchise.  The rest are unnecessary, and that’s my issue.  So many of these films don’t need to exist.  Which is why I find it odd that I, of all people, is sitting here putting over the idea that The Defenders should be the ones to get the next new film franchise.

With Spider-Man now ‘far from home’ and taking Iron Man’s place as the tech genius in the MCU, the streets of New York are again littered with crime.  It would make sense to bring these characters together once again to save New York in a movie that’s far less awful than the Defenders series was.

The Netflix service killed the ability to bring the shows to Disney+ due to licensing issues, but I would be astounded if Disney again let an outlet other than themselves have say in when and where they can use their characters.   While a TV show is probably contractually not possible, a film should be as film and TV aren’t usually the same in the eyes of contracts.

Assuming a movie can be done, you can do a number of stories.  The Avengers leave Earth, but a new Hulk (Red Hulk) is running rough shot through New York, and they’re the only heroes to defend the city.

You can also do a story where the Defenders are recruited to hunt down The Punisher, after he kills a U.S. special agent or congressmen or whatever.

You could even have them trying to expose The Kingpin as he runs for Mayor of New York.  There are so many possibilities here.  Mostly I’m just angling for a shot looking at Captain America’s memorial, though thanks to Endgame that technically can’t happen, as Captain America never existed now, and if he did he broke the time travel mechanic in the film.

Either way, these characters deserve real costumes, actual good stories and the same loving touch that Kevin Feige gives to all of his films.