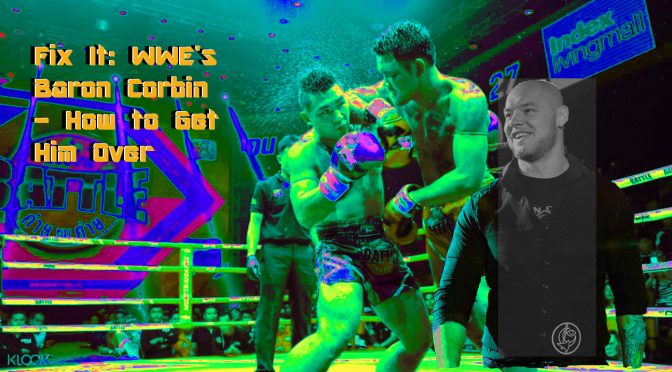 So……I’ve broken myself, haven’t I? I must’ve if I’m the one sitting here saying this.  Corbin is not good.  He’s not bad, but he’s not good.  He’s boring on the mic and he looks goofy as hell.  He’s got a dumb finisher and they treat him like a joke.

So, it’s all uphill from here.

The thing is Corbin has a unique skill set that could really be utilized to make him stand out from the crowd.  We are in an era these days where everyone can do a suicide dive or a senton bomb.  They’re not special anymore and the era of the ‘flippy dippys’ will be ending sooner than people want to admit.  Corbin is the perfect guy to bring in the next era; the shoot fight era.

Don’t believe me that pro wrestling is going that way?  Brock Lesnar, Ronda Rousey, Matt Riddle, Josh Barnett, Tom Lawlor, Killer Kross and so many more are coming into pro wrestling with karate, MMA or some other combat sport background to their name.

One of the most successful shows of the WrestleMania weekend this past year was Josh Barnett’s Bloodsport, which saw MMA style-pro wrestling bouts.  Low Ki and Lawlor built the back of the biggest MLW feud of it’s relaunch, and both men brought that style to their feud.

Hell, even International Pro Wrestling is going full work-shoot with their new gimmick.  They’ll be doing 4×5 minute rounds from now, which pins, submissions, DQ’s and count outs all counting.  Their championship bouts will be.  Championship bouts will be 12×5 and any match that ends in a draw will be handed over to the judges for a decision.

We’re going in that direction.  With fighters like Cain Valezques, Paige VanZant, and Daniel Cormier thinking about making the jump and others like Phil Baroni, Stephan Bonnar and Frank Mir already involved to a degree in pro wrestling, it’s hard to deny the next generation.

This is where Corbin comes in.  Corbin is an amateur boxer, with real authentic Golden Gloves to his name.  Give him several months off, send him to a Muay Thai camp and bring him back as a new version of the ‘boxer’ gimmick.  Have him KO wrestlers with quick rights, or drop people with ease with a knee.

You’ll say that Big Show had a similar knockout gimmick but Show didn’t earn the gimmick.  I don’t mean he slacked, I mean he didn’t change anything else.  He was the same guy but with a fat hand.  OOOOOooooooh, how impressive.  With Corbin, he’d get a look change, new gear, and a whole new style. He’d be given a whole new makeover, with a Street Fighter twist.  Think Adon or Sagat for the look of the outfit.

He could even be seen as ‘too aggressive’ by the refs and announcers, where he is constantly taking off his ‘mandatory’ gloves, and going with just his taped fists instead.  When he does this, it can be the whole “foreign object” gimmick, where he takes off his glove, KO’s the dude and gets the win.  The gimmick would be that the WWE is allowing him to bring in a new style to the ring, being Muay Thai, but he has to keep protective gear on his fists at all time. Though, he’ll have to get caught once in a while and get DQ’ed to really sell that aspect.

Corbin should also be kept out of long matches, and served only as a squash kind of guy.  It wouldn’t be hard to protect other higher level wrestlers, as the announcers could simply talk about how much easier it is to KO someone as opposed to pin them or submit them.  This really only works long term if you build back up guys like Braun Strowman and Brock Lesnar.  Having Corbin being able to pepper their face with strikes, and getting close to beating them when no one else can would put over Corbin without needing to have him go over.

It all comes down to execution and commitment.  If the company doesn’t buy in, or book him properly, then it doesn’t matter how you book Corbin, he’d be doomed.  Yet, I think fans would buy into this if he commits.  If it’s handled right, given adequate build up and a substantial effort in making him look dominant; fans will buy it.

I mean, Damian Sandow and Ryback got over; so why not Corbin?