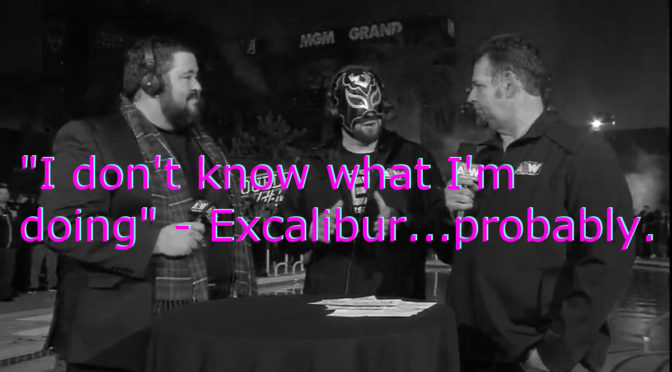 “I believe in nepotism, I believe in giving your friends jobs. I wouldn’t be here if it wasn’t for nepotism.” – Cody Rhodes

Despite what the typical AEW fan will tell you, AEW has more issues than it knows how to solve at the moment and no more glaring than that of commentary. Cody Rhodes once said at Starrcast that he’ll hire his friends. He inferred that nepotism is a good thing.

So it’s no surprise that he hired his buddy Excalibur to run the commentary booth despite having more polished and actually educated commentators on board like Tony Schiavone, Alex Mendez, and Jim Ross.

Fans all over the internet are calling out Ross for “no longer having it” and being the issue on commentary. Except, he’s not. Not really. Sure, it seems like he’s clueless at times but that’s actually not the case. Not at all. Wrestling, like anything else done on television, requires the ability to explain things to first-time viewers.

Every sport, every form of media that runs more than a few months a year does this. You’re not going to catch up on The Daily Show, that’s 20-plus years and three hosts worth of shows. So each time you tune in, the host of the show will do their job to explain the more important parts of the show to first-time viewers. Same thing with Monday Night Football or the NBA on TNT.

So when you have a debuting tag team in the ring, in this case, the Butcher and The Blade, and you do NOTHING to put them over, or explain who they are then that leaves the moment lacking. This is just the most recent example of Excalibur failing to explain to the casual audience who the talent is. More than 70% of this roster is unknown to even the most nuanced fan. So it’s the announcer’s job to put talent over.

So when The Butcher and Blade debuted, Ross did everything short of screaming “TELL THE FANS WHO THE FUCK THESE TWO CLOWNS ARE” at Excalibur. Because Excalibur is bat at his job. Excalibur has never had to commentate for casual fans before and it shows. His inability to relate to the audience or properly call matches is noticeable and a big reason why the product has fallen completely apart since it’s initial debut on TNT.

TNT needs to step in and demand that AEW change their announcer. The longer Excalibur is allowed to undercut the talent that debut or the importance of the moment on screen, then the longer it’ll take to fix the on-screen product. Excalibur is more worried about getting his weak-ass, underground pop culture references over the talent and it shows.

When the show gets bounced into a less desirable time slot, look to the commentary as a big reason why. That and Cody’s inability to make hard decisions. This company is already in trouble and no one seems to care.