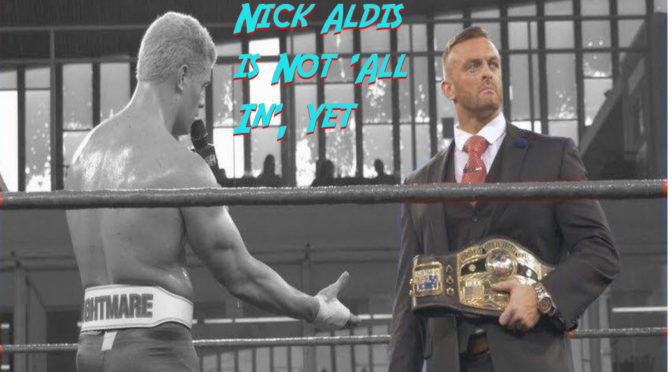 I want All Elite Wrestling to be successful and I believe they will be.  That doesn’t mean they’re perfect or making all the right decisions and right here is proof that they need to learn to evolve.

While this may be an edict from Tony Kahn, as he does have a lot of say-so in how the day to day goes for the promotion, this also just might be the ego of Cody and The Bucks.

Nick Aldis spoke with Daily DDT recently and revealed to them that not only did AEW offer him a deal, but he turned it down to keep on with the National Wrestling Alliance.  It turns out that if asked to end his allegiances with Billy Corgan’s lead promotion, it won’t happen.  As the brand looks to launch later this year in earnest, Aldis (current NWA Worlds Champion) is a key cog in rebooting the brand as a touring promotion.

Aldis wasn’t unjust in his opinions, even though he’s an ass at times, by asking Cody to allow him to do both; something AEW has not seem to be keen on at the time.  Aldis spoke on the matter to  Daily DDT, saying;

I’ll tell you the truth: I was made an offer by AEW. I counter-offered with, “I’d like to be able to do both.” I’d like to work with them because obviously I have great admiration for Cody and the Bucks for what they’ve been able to do. But I wasn’t prepared to walk away from the two years of work I’ve done with the NWA. And that was that. I left it open with, “If you can find a way to keep doing this and do your show, I’ll do your show.”

They essentially wanted to offer me a contract and have me walk away from what I’m doing here and I said that doesn’t make any sense to me. Really, there’s no reason to. It’s just a hangover from the way things have always been done. Obviously, we hear this “Change the World” phrase a lot, but that was my pitch to them. “If you really want to change the world, why can’t we do that?”

Because that really would be a change for one guy to work there but also come here. I’m still on very good terms with Cody and the Bucks and I had a very nice conversation with Tony [Khan] and everyone was aware of it. Billy and Dave were aware of it.

At the time, my stance was if I can do both, then I’ll do it and I think that as it shakes out and everyone starts to realize the demand that will be on them with cable TV and stuff like that, those possibilities will be way more apparent in the next coming year for some guys.

Should Aldis pick AEW over NWA, or should AEW let Aldis do both? Let us know what you think on Twitter @NerdCorp.