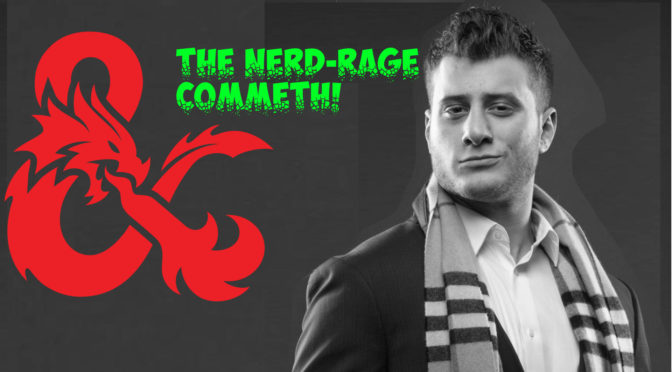 I love Dungeons and Dragons, though I’ve never played it.  I’m a fan of the idea.  And the episodes of Community that worked it into the plot.  So I say none of this to mock the D&D community.

But you guys just got wrecked by MJF.  The Level 69 Heel Lord of AEW posted a post-workout photo and claimed that he “didn’t play D&D”.  This obviously pissed off D&D fans everywhere because…we’re all looking for reasons to get mad these days?

But not all D&D players got mad.  Some who straddle the fan line tried to qwell the fiery flames of rage-dom, and others just laughed at the silliness of it all.  Some even played along

Sounds like you probably had a bad introduction to D&D, friend. No worries! I did too! With the right group, and a bit of trust, you’ll have the time of your life. Heck! Maybe ask @BranCutler to run a game for you after he picks you up off the mat! <3

Could care less about your shitty little game or that you are a level 95 knighted dipshit. https://t.co/yLsjqIa0wi

Oh…Nevermind, a level 100 Buzz Kill has entered the game.  This woman has…issues.  Severe issues.  Her issues aren’t her problem though, they’re everyone else’s problem.  Let’s break her tweets down one by one and just…enjoy the overreaction.

Yeah this isn’t just a character he’s genuinely picking on people in our game space.

It’s taken us years to get to the point where we don’t have to be afraid of bullies like you. https://t.co/dQLAWIETxQ

Firstly, she knows nothing about the pro wrestling fandom.  Wanna talk being bullied?  Sweetie, take a seat and let us tell you tales.  Secondly, MJF didn’t “at” anybody or even hash tag it.  His fans spread this, then attacked him.  Who’s the real bully, eh?  Those that attacked him?  For saying he DOESN’T PLAY A GAME. Oh my god, how triggering…

Legit even bullying on Matt Mercer fuck this guy. https://t.co/fmtZ2IGQ6M

Here we have Mercer bullying MJF, saying that because MJF doesn’t play D&D and Brandon Cutler does, that MJF should get his ass kicked.  Well Mrs. Roleplayers, are you going to huff and puff and stomp your feet cus MJF got bullied?  Or are the blinders too tight, and the self-righteousness a bit to chaffy?

I have to many wounds. To many times spit on, rocks thrown at me, beaten up, books and cards ripped apart. Minis stolen, general bullying and more for it to be an “act” or a skit. There’s way to much pain there for it to be remotely funny.

People beat you up because you played a table top board game? Are you sure?  I think hyperbole is at work here.  Hey, maybe you did get beat up.  I don’t know your story.  Though, are you really going to sit here and correlate a heel character saying “D&D is trash” is the same as physical violence.  ARE YOU REALLY GOING TO GO AND BE THAT PERSON?  Jesus, don’t read the reviews for Captain Marvel, you’ll cry yourself into a coma…

There you have it. Stop telling me it’s a character the man is just straight up a bully. Going to inspire other people to hurt other people. https://t.co/BsEsGAmNIT

She totally thinks Josh Brolin is Thanos just because sometimes Brolin talks in a Thanos cadence.  Gee, it’s not like, I don’t know, she’s LOOKING for a reason to be outraged?  “Grrrrrr you’ve said bad words!!! Now you deserve to die!!!”  Calm. Down.

I’m done commenting on that garbage human. Both sides should be ashamed for this storyline in wrestling. I will forever boycott that station and the org.

1) She was never going to watch in the first place.  So that’s not a threat.  2) Why should anyone be ashamed but your side?  All he said was he didn’t play D&D, you assumed his intent.  You and yours started this dialogue.   You and yours escalated it.  Here’s something that might help you deal with your “cognitive distortion”.

At the end of the day, this chick severely overreacted.  No dude tweeting out “I don’t play D&D” should ever be in the middle of such a blow up.  This was an unnessecary action and I hope all you D&D fans that overreacted get checked.  The world isn’t out to get you.  We don’t care that you play D&D.  The sad truth, the most damning truth, we literally just don’t care what you like.

Maybe that’s the issue.  Maybe the fact we don’t validate your desire to be known is why you’re so upset over someone not liking the thing you like.  The only trash human being here is you, for being the kind of person who writes off someone playing a character.  Something we all know he’s doing, but you don’t want to accept.  Because you like bullying others.   Clearly.  Because you went after MJF.

There is no such thing as “justified bullying”.  That’s why such actions are referred to as “sinking down to their level.”  You’re literally no better than the person you spent hours raging against and hate-tweeting.  Congrats.  You’re a genuine pro wrestling heel now.