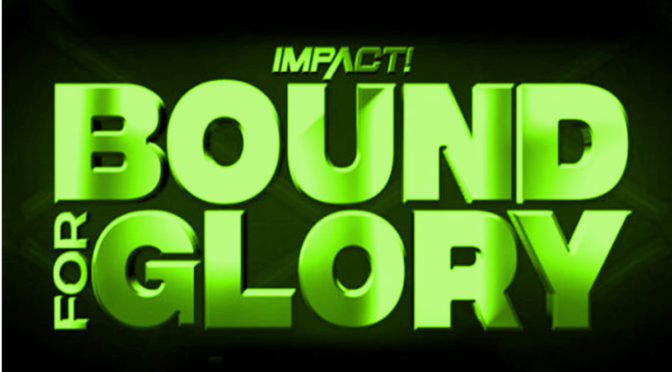 The one thing we know about IMPACT is that the IMPACTPlus and Twitch streams are usually in line with what the next big pay per view will present.  For instance at this past weekends Victory Road, Moose and Stephan Bonnar fought, building up to Moose’s showdown with MMA icon and former IMPACT World Champion, Ken Shamrock.  Synergy in the booking.

However, one concern that I’ve had for some time is the addition of 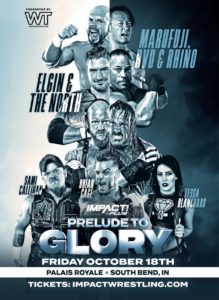 Tessa Blanchard to the IMPACT World Title scene. I’m not a fan of inter-gender wrestling, I don’t care how ‘woke’ or ‘in vogue’ it is.  I’m never going to be ok with it.   Adding Blanchard to the World Championship match insures she’ll win it, and one has to ask why IMPACT feels the need to do such a thing.

My concerns for this were alleviated when it was formally announced that Brian Cage and Sami Callihan would face off at Bound for Glory one on one.  Those concerns came back in a big way when IMPACT released their first look at the Prelude to Glory’s poster for the Friday IMPACTPlus event.

On it we see that NOAH star Naomichi Marufuji will be on hand to face off with Michael Elgin as part of a six-man tag match.  Marufuji announced on Twitter yesterday that he had formally accepted Elgin’s match request.

Also in the six man tag match is The North facing off with Rob Van Dam and Rhino.  All four men are still free for the event, and this bout would make sense.  RVD and Rhino are major names that IMPACT want to utilize to help sell tickets and challenging for the tga team titles would be a good way to generate buzz.  It’s also a win/win for The North and ECW veterans, because regardless who wins, there’s money in a rematch.

Then you see IMPACT World Champion Cage front and center, with Callihan and Blanchard flanking him.  We’ve known for some time that IMPACT values the ultra-talented Blanchard heavily.  Yet, instead of giving the Knockouts Championship a big boost by having it main event with Blanchard vs. Valkyrie, it looks like IMPACT will shoe-horn her into the Callihan/Cage match just for IMPACT to crown a women’s IMPACT World Champion for the first time.

Inter-gender wrestling is a pretty niche genre in an already niche genre.  While Blanchard should be used and promoted as the top star she is, why take her away from the Knockouts Division? I’ve been a long standing proponent of making the Knockouts title a Women’s World Championship (Knockouts World Championship*), so why not do that?  You’d never see a UFC fighter go into the women’s side of their respective weight division looking for a fight.  Why?  Because we all know how ugly that’d get.  No one wants to see that happen.  It’d be too one-sided.

This is the Candice Parker/NBA discussion all over again.  When Tennessee Vols star Candice Parker came out of school and declared for the WNBA draft, many sports-hosts were saying she was good enough to play in the NBA. This idea was shot down by many, pointing out the logical differences in the dimensions of the court and ball sizes, as well as how it’d make the WNBA look.

Which was to say, bad.  The idea is that if you cherry picked women from the WNBA to play in the NBA as 9th or 10th players off the bench, then you severely affect the perception of the WNBA.   I fear that’s what’s going to happen with the Knockouts Division.  I already have zero interest in Tenille Dashwood, and the idea that she’s the one going to end Taya Valkyrie’s title reign at Bound for Glory is dumb.

Blanchard should be the one to end the iconic reign, and do so in dramatic fashion in the main event of the show.  I worry for Cage’s back, still.  Having the men go on before Blanchard and Valkyrie would insure that if Cage is still limited, that the match won’t have to be the epic bar-burner it could otherwise be.  It also propels the Knockouts title into a loftier status.

I’ll probably never be down for inter-gender wrestling.  That doesn’t mean though that I’m against Blanchard being the star of the show.  She absolutely should be.  I just don’t think we need to do any more carny style bookings like inter-gender wrestling.  IMPACT should be taking a NJPW approach for how they book.  More authentic sportsmanship and combat, and less sports entertainment.