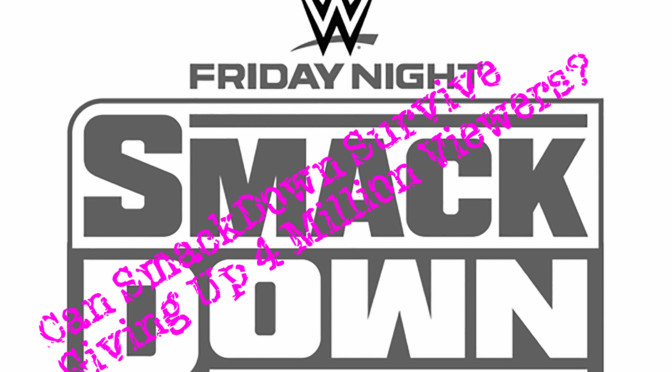 There is a notion in the air that the WWE somehow has a full guaranteed deal with Fox to air SmackDown.  Meaning, if Fox were to cancel the show, WWE would still get their X-amount of dollars.  That is simply not true.  No channel, no station, no programmer in the history of television would ever give a guaranteed deal to a program.

Let’s talk about why shows get cancelled and the timing of which.  Not every show that gets cancelled goes away immediately.  Why?  Because different shows have different budgets and some shows can be stretched out a little longer than others, without costing too much money.  For instance, iZombie; the show had lower ratings than other CW shows.  Yet, it staved off cancellation for years.  Why?  Well, despite it’s lower than average ratings, the costs for the show were also lower as well.

Shows only ever get cancelled for one of two reasons 1) a bigger and more well known property has been acquired and it needs a time-slot to air in, and that show it will replace is one of the lowest viewed.  2) a show’s budget exceeds the shows profit.  This is why shows like Firefly and The Sarah Connor Chronicles get cancelled despite strong numbers – they’re too expensive.

The WWE is not a cheap show.  It has a high production budget.  It owns all of it’s own broadcast trailers.  They have to pay for the ring crew, the wrestlers, the announcers, the rig and lighting crew, as well as pay for the arenas, while renting out the arena employees, paying the local Unions to aid in set construction etc.

I would be gobsmacked if on average the average RAW didn’t cost a half-million to put on.  (I looked it up, and estimates are closer to $900,000 per episode).  So you’re looking at over $2 million to run weekly t.v. for the WWE.  A lot of that is subsidized by television rights.  The basic gist of how that works is the network breaks down your potential earning potential.  They then see what their advertisers are willing to pay to air their products in that block of air time.  They then offer the contract to the television show.

The television show rarely makes money from the advertising.  That’s money the network uses to recoup the costs for airing the show.  There is ZERO chance the WWE drops below two million views and keeps their coveted slot.  This however is also why the WWE is on Friday.

Friday’s are the lowest revenue generating ad rates of the five-day-work-week.  Fox doesn’t have faith in the product already, at least not much, if they’re putting them on Friday’s.  Fox proper airs football on the weekends, but that’s a proven winner.  So being on at twelve in the afternoon isn’t a bad thing, because college football only has one superior.  Pro football.

Yet, Friday nights is often the night where families go out.  Where young adults meet up with friends and when people generally aren’t interested in watching appointment television.  This has been the case for thirty years.  Outside of TGIF (all cheaply made shows by the way), TV outlets view Friday’s as the place a show goes to die.

‘Why not juts cancel the show then’, you ask?  Because it’s still more profitable to run the clock out on a show’s profitability than to invest millions upon millions more on a show that could potentially not get past the pilot episode.  It’s just cheaper to run with a low earning show.

Supernatural is a key example of a show moved to Friday to die.  However, the fan base for Supernatural went with it, and it actually increased in viewership, moving the show to the top of the CW brand for the next nine years.  Their ratings rarely fluctuated, which meant they had a much more firm grasp on what to expect from the show financially.  Making them easier to pitch to advertisers.  SmackDown’s ratings fluctuate too much, and wont’ be as reliable.

WWE knows that Fox has a fast trigger finger.  Especially these days.  Fox is no longer burdened by having to pay for their own shows. They’ve cut their costs way down when they sold their studios to Disney.  Without those studios though, they have less potential revenue.  Instead of just earning most of the revenue themselves, they now have to split all profits with the studios that they essentially ‘lease’ the shows from.  Which means every time slot needs to be properly optimized so both the network and studio can get paid.

For reference, Fox did about 4.5-5.0 million viewers last year during the 8-10 PM broadcasting hours.  Six million in the 8-9 slot.  Nearly 7.0 with Last Man Standing alone.  Cool Kids did about 5.0 million, while Hell’s Kitchen did about 3.0 million.  WWE SmackDown is averaging about 1.9-2.1 million people per episode these days.  The diehards are going to talk about how moving to Fox will give them a “bigger market” but the fact is pretty obvious; no it won’t.

SmackDown is  still on a basic cable package.  Which means it costs next to nothing to get cable to see it.  We’re talking it’s cheaper to pay for cable for a month than to take a date to one movie and get food at the concessions stand.  That’s the price of the USA Network, a movie date.

If non-WWE fans were so interested in watching SmackDown, they’d be watching SmackDown.  Moving SmackDown to Fox isn’t going to magically give them double the viewers over a prolonged period of time.  That’s a joke.  Fox’s Last Man Standing got moved from liberal-Disney owned ABC to conservative owned Fox and LOST viewers….ON A REPUBLICAN-THEMED SHOW.  Changing networks is no promise of anything.

This is why Brock Lesnar, Ronda Rousey, Corey Graves, Michael Cole, probably John Cena, Roman Reigns and every other major guy is moving to SmackDown.  Because SmackDown is now the number one priority.

Fox won’t hesitate to kill the WWE deal and put on cheaper shows that garner a larger audience.  Last Man Standing may of cost nearly as much as RAW, but it also brought in three times the audience. Don’t discount the dramatic drop in viewership that Fox will have to deal with.  If ratings don’t rise for SmackDown on Fox, either budgets are getting slashed or the show’s getting cancelled.

There is no margin of error here for SmackDown.  Fox is giving up half of it’s Friday night audience for this show, and Vince McMahon’s company can’t afford to screw this up.