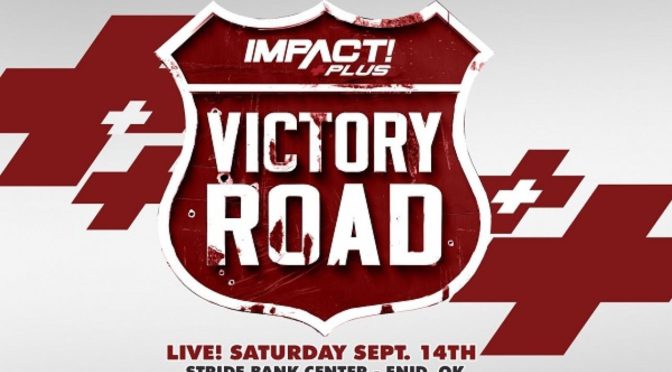 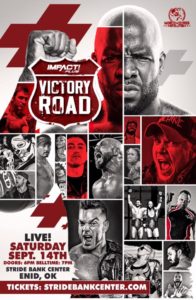 Center in Enid, Oklahoma.  The event starts at 8 PM EST/7 PM CST and airs live on the IMPACT Plus (IMPACT+) service.

The card so far is made up of four matches but two major former names of IMPACT yesteryear are expected to return – if the promotional material is any hint.  In the promotional material to the left, you can see several talent for the card already booked and announced like Michael Elgin, TJP, Moose and Stephan Bonnar.  Two more names that you can see are former IMPACT Wrestling World Tag Team Champion Chavo Guerrero Jr. and former head of the Beat Down Clan, MVP.

According to the Enid Buzz, Brian Cage will be at the show, as well as a surprise “appearance”, though that may just be Chavo/MVP.  Wrestlers not yet announced but are listed in the Enid Buzz preview include Rhino, Rich Swann, Eddie Edwards, Willie Mack, and Kiera Hogan with independent talent from the Operation: Override event being featured as well, includingThe Arrow Club, Fuego Del Sol, andTego of the Step Brotha’s tag team.

IMPACT needs to better announce this stuff ahead of time, and on their website where everything is in one place.  I’ve found only four matches for this event announced, and no mention of Chavo Guerrero or MVP being on the card; just on the promotional material.

The main event looks to be Moose vs. Stephan Bonnar.  Bonnar is in the Fight Wing of the UFC Hall of Fame, and was actually Moose’s tag team partner at Bound for Glory 2017 when the event was

featured in Windsor, Ontario, Canada.  MMA dick-bag Colby Covington and recently retired Muhammad Lawal were also part of that match.  Now Moose and Bonnar will be on opposite sides of the ring, with Bonnar going to become part of the Moose/Ken Shamrock feud going forward.  It may just be a minor part but this might lead to more Bonnar in IMPACT, which I’m all for.

Another bout that has been added to the card will see Rosemary take on Taya Valkyrie for the Knockouts Championship.  This is 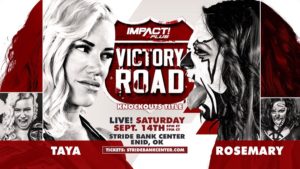 obviously only if Taya survives against Desi De Ranta and Kiera Hogan the night before.  I wouldn’t be surprised at all if Taya were to lose to Rosemary here, just like LAX lost to The North back in July heading into Slammiversary XVII.

Foreshadowing Michael Elgin’s feud for the Las Vegas loop, the Canadian will take on TJP in a match that might be a potential barn burner.  Elgin isn’t a good dude, but he’s a heck of  hand, and 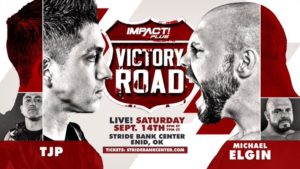 TJP while lacking that…what’s that thing he doesn’t have…OH YEAH, charisma, but the two of them could put on a real banger if given time.  This isn’t going to be a huge set-up match for Bound for Glory or anything but it could very well be part of the build up to it.

Of the last announced matches so far, we have Sami Callihan taking on The Arrow Club’s Hawk in a one on one match.  It’ll be interesting 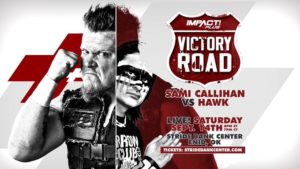 to see how Hawk fairs against Moose the night before at Operation: Override, as Moose has become quite a hand in the last three years in IMPACT.  When you realize that Callihan is a better worker, he might be able to really showcase Hawk’s talent, getting more eyes interested in the First Nation’er.

Announced around noon today, The North are set to face off with Rich Swann and Fuego Del Sol.  Again, the tag titles won’t be on the line, for some reason.  Fuego Del Sol will stand in for Willie Mack, 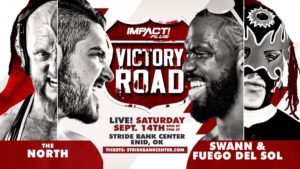 Swann’s usual tag team partner, as they take on the North on this match.  As mentioned in the write up for Operation:Override, Del Sol is fairly new to the wrestling mainstream and pairing with Swann against The North will help showcase what he can do.

Rohit Raju has pulled the Eddie Edwards card for Victory Road.  I’m fairly certain this is the first time the two have met within IMPACT, 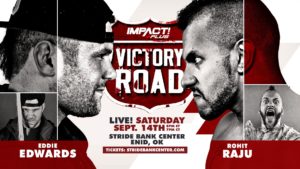 and the match represents a huge opportunity for Raju.  The Desi Hit Squad continues to be used as a jobber/comedy tag team.  Raju doesn’t need to win, so much as he needs to show.  If he can put in a good outing with one of the best workers in the world, then we may see more from the Desi Hit Squad.

Next up is a good opportunity for two young women.  Kiera Hogan will face off with Desi De Rata/Desiderata.  Hogan has been getting more and more play as the year goes on.  Clearly this road trip is 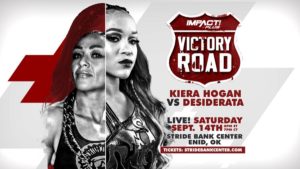 going to be key in setting up the pre-Bound For Glory t.v. spots, as well as the BFG event itself.  Is Hogan in line for more of a push heading into the event?  Will De Rata impress against a fellow skilled youngster? We’ll see.

Just added for the show, is a rematch of MVP and Chavo Guerrero.  I’ve been updating this throughout the week, so different portion 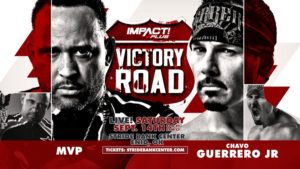 shave been written on different days.  Chavo just got DQ’ed in an apparent title match against MVP.  The rematch has been added to the card tomorrow, though no mention of Chavo putting his title (not sure from what company) on the line against MVP is mentioned in the match promotion.

As more matches are announced, this will be updated to reflect it.