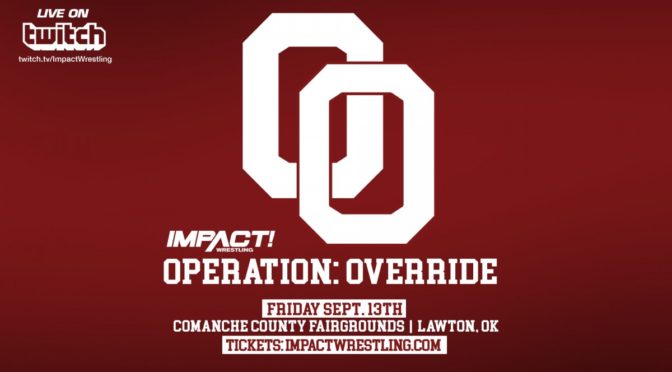 IMPACT Wrestling starts a back to back of shows this week in Lawton, Oklahoma, the first being Operation:Override and it’ll be live on IMPACT Wrestling’s Twitch starting with the pre-show at 6:30 EST.  The show is being brought to the area thanks in part to World Class Revolution wrestling.

The show currently has seven bouts booked on the expected two-hour long card, with the main event being  a rematch of one of the best feuds  of the last ten years in 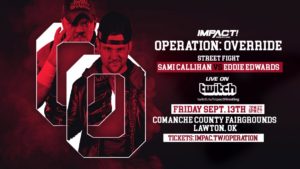 IMPACT Wrestling, Sami Callihan taking on Eddie Edwards in a Falls Count Anywhere match.  Callihan and Edwards have met several times this year, and is 0-3-1 against Callihan.  The three losses came at A Night You Can’t Mist where Edwards lost in a street fight, the Mash Up Tournament finale where he and Moose fell in the first elimination of the four team main event, and back in March at Rockstar Pro’s Opening Day.  The lone match they competed in where neither man won was at Digital Destruction, where Willie Mack retained his HOH TV championship over both men.

In a Knockouts Championship match, Rosemary will take on Desi De Rata, Kiera Hogan and defending champion Taya Valkyrie in the only title match listed for the show as of yet. 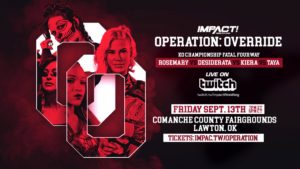 Desi De Rata (aka Desiderata) is/was a member of the Oklahoma based Arrow Club.  Her former running mate Ky-ote wrestled on the 2017 IMPACT Wrestling event, Collision in Oklahoma, tagging with Kid Kash against the Von Erichs.  De Rata is also an MMA competitor with a blue belt in Jiu Jitsu.   Kiera Hogan and Rosemary are well known to IMPACT fans, while Taya Valkyrie is now stat-padding her record for longest single reign with the Knockouts Championship.

Next up is a bout with Moose, taking on Hawk, also known as Kyle Hawk.  Hawk was Ky-ote’s tag team partner but Ky-ote has seemingly 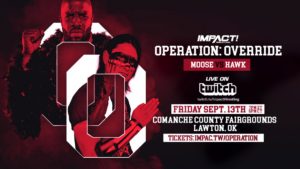 left the industry as of 2017, though that may just be poor record keeping by Cagematch.  Hawk was supposed to partner up at the Collision in Oklahoma event but didn’t make the show for an unknown reason.  Now the First Nation wrestler has the ability to showcase his talent against the former NFL-er Moose, and maybe show IMPACT management that he is worth a full time deal.

In a triple threat X-Division match, Rich Swann, TJP and Rohi Raju will square off against one another.  Raju isn’t known to be on a lot of these road events for IMPACT, 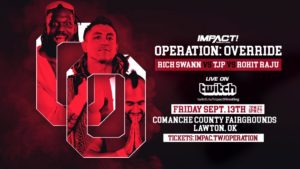 A relative new comer to the major scene is Fuego Del Sol (Fire of the Sun), the 23 year old from KBW Wrestling.  He has the unfortunate 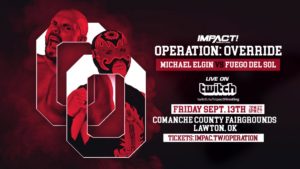 task of facing off with Michael Elgin in a match that’ll more than likely only serve to showcase Elgin’s strength.  Del Sol is barely 150 lbs it looks like and Elgin is at least 250 with some legit muscle and mass on him.  I expect Del So l to change his name to Fuego del Techo, because his ass is going to be in the ceiling after the match.

The North will be in action but won’t be defending the IMPACT World Tag Team Championships at this moment.  They’ll be facing off with relative unknowns The Step Brothas. 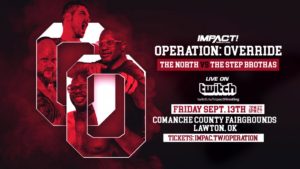 The Step Brotha’s appear to be Impact Zone Wrestling alumni, and has even had bouts with Scott Steiner of all people.  The match isn’t that big for The North but it’s a good opportunity for the Step Brothas to make a name for themselves.

And the last main chard match is the return of Mahabli Shera after a short stint in NXT.  Shera had a moderate run before leaving, debuting as a blue chipper, 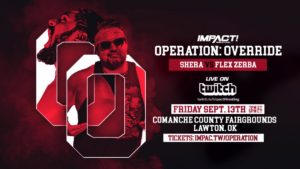 before joining James Storm in The Revolution.  He would then try to get over this weird bicep dance, and would be one of the few in the ring with Sonjay Dutt after Dutt won the X-Division Championship.  He’s taking on the aptly named Flex Zebra, a man who’s backstory is irrelevant because he’s called FLEX ZEBRA.  Sign him.

The preshow will feature a match, as Retro Randy, Damon Windsor, Double D, and Rage Logan are going to face off in a four corners match. 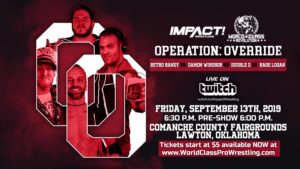 The show isn’t being advertised on the IMPACT website, though it is being circulated on social media.  Retro Randy seems to be the name to look out for in this match, as he’s constantly making sizzle reels of him in iconic movie roles, while also gaining a lot of support from fellow wrestlers for his charisma.  We’ll see if the hype is worth it.

In a bout that I thought for sure would end up on Victory Road (possibly a rematch coming?), the former World Tag Team Champion of IMPACT Wrestling himself, Chavo Guerrero Jr, will be in action, taking on the former leader of the Beat Down Clan; MVP.  MVP is a name that I wish had a better run in IMPACT the first time around.  He was set for the world title, but got injured. 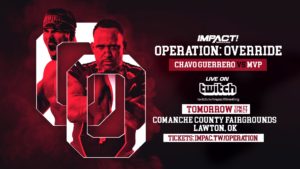 He then formed the super group of the BDC, and that was going great until MVP brought Hernandez on board, while Hernandez was still contract by Lucha Underground.  IMPACT had to cut over a few hours of content from their weekly shows because of this, upping the production costs, and had to make good with Lucha Underground, and thus MVP was fired.  MVP isn’t a spring chicken anymore, so I’m not expecting a five star classic, but if he and fellow-aged wrestler Chavo can put on a good bout, then maybe MVP could get another run in the company?