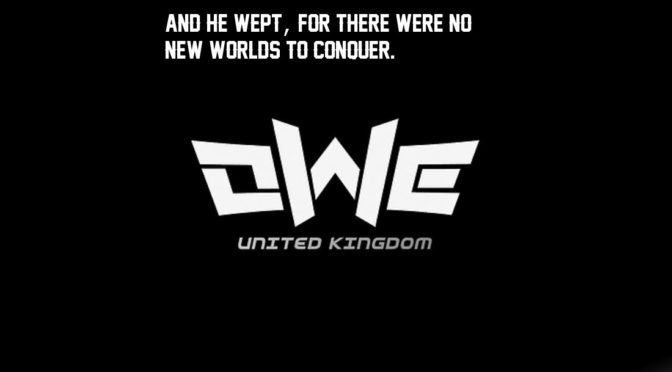 If you’re not surprised that this is happening, wait for it.  It was only a matter of time until the UK indy-wrestling Renaissance would come to an end.  That ticking clock started when several big indies, namely PROGRESS pro wrestling got into bed with the McMahons.

The ripple effect since then have been obvious.  Trapping talent in bad deals, lying about the wrestlers being able to work elsewhere (that wasn’t non-WWE approved) and limiting the opportunities the talents can have outside of the promotion have all lead the UK scene to morph into something different.  Not the punk-rock scene it once was, but now more along the lines of the Serengeti.  Where everyone is hunting the same prey.

Because of this PROGRESS co-founder Jim Smallman left the company he started for NXT.  Other dominoes have fallen too, like the closing of WhatCulture Pro Wrestling/Defiant Pro Wrestling, and the WWE creeping into the European market by snatching up wXw’s head WALTER and getting into bed with the German based promotion.

Now a promotion that was covered on this site for a time, Southside Wrestling has announced they were selling off their promotion to rival UK promotion RevPro.  RevPro is one of the stronger indies in the UK, namely due to their close ties with New Japan Pro Wrestling, which is where their British Heavyweight Championship is routinely seen on broadcasts, and is currently held by Hiroshi Tanahashi.

In a now deleted Facebook post, with screen shots thanks to SugeD (@SugarDunkerton), the former owner of Southside indicates the hassle of running the promotion was waning on him, as was the financial hardships. 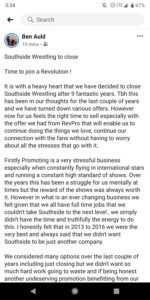 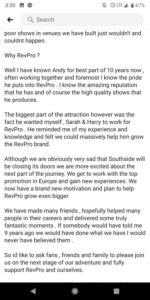 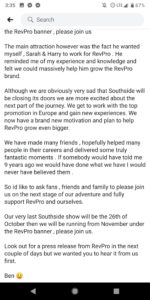 No idea what RevPro is getting out of the deal, I’d imagine just the tape library and any intellectual properties like logos, names and such.  There might be a few rings or other equipment as well.  The move was mostly symbolic I’d imagine, and with the low-key dig at maybe NXT UK in there (undeserving promotions?), it was obvious that former Southside owner Ben Auld was not going to sell to just anyone. Only someone who had the scene’s best interests at heart.

But what if I were to tell you that a near decade old staple of the UK indy scene being bought out wasn’t the biggest shock to the UK system today?

Hold on to your butts;

Have you heard of AEW?  Unlikely but they’re this little indy out of Jacksonville with some talent, and they decided to partner up with a Chinese based promotion, OWE (Oriental Wrestling Entertainment).  The partnership has brought new eyes to the OWE product than ever before and the Chinese acrobat promotion started to gain traction in various regions.  One of those regions was – you guessed it – THE UK!

Earlier this year it was announced that OWE was opening up a UK based promotion, in order to cultivate western talent to the OWE style, while building relationships for touring.  To further build this brand, OWE hired Sean McMahon to run OWE UK.

Everything was going good until today, when around 10:00 am EST (or around then), news broke that OWE UK’s tour was cancelled, which was quickly switched to postponed.  Then news broke that Sean McMahon was resigning as the promotions Senior Vice President and director.

In a quote on his official facebook page, McMahon wrote;

I have submitted my formal immediate resignation as a director and head of marketing of Martialism Sport & Culture Communication UK Ltd, trading as OWE United Kingdom.  I have decided to resign as a director, due to, what I feel, is misconduct of the director and OWE China. I find this to be totally unacceptable, damaging to the industry and reputation of all who have committed themselves to ensure the tour would have been a success. The company will now be required to either continue with the tour themselves with Jay Apter or myself or make other arrangements.

In a follow up to Fightful, he claimed the comments of ‘misconduct’ had to do with “broken promises”.  So, this looks like OWE fucked up, right?

OWE UK and OWE were not ran by the same group.  Obviously.  The UK side of things was ran by several UK Wrestling veterans, one of whom owns the indy company that OWE was going to tour with.  So not only did the OWE UK account delete itself,  OWE also posted this to Twitter before the deletion of the account…

OWE were shocked today to learn that the planned UK tour had been delayed.
While we partnered with a UK promoter to use OWE in the UK, we’ve been unable to reach them for several days.
We also have no access to any OWE UK social media
Full statement will be released shortly.

By all accounts this seems to be the UK promoters screwing up and opting out of the tour.  Indy wrestler Lou King Sharp even tweeted out his support for the Chinese ran OWE, saying;

Keep in mind, OWE in China and OWE UK where separately ran. OWE is trying everything they can to pick up the pieces that the UK promoter seems to have dropped and left.

Ive had nothing but pleasent dealings with the Chinese management and I’m sure this will be sorted.

As of right now this is where the situation goes cold, for now.  The UK scene just took a giant dick kick tonight and I’m not entirely sure what comes next for them.  They’ve already been bastardized by the WWE, and their indy scene is being poached.  All the people who defended the WWE’s incursion into the scene are looking foolish now because ever since the WWE destabilized the region, promotions are folding, talent are being blocked from honoring their dates and now no new promotions can get footholds because all the best UK promoting talent are under exclusive deals.

They say Alexander the Great wept because there were no new worlds to conquer.  I think he wept because he saw the end of his reign.  That if he wasn’t growing, then all he could then do was die.  The UK scene is no longer growing, and there are many who have been left crying over these last few months.