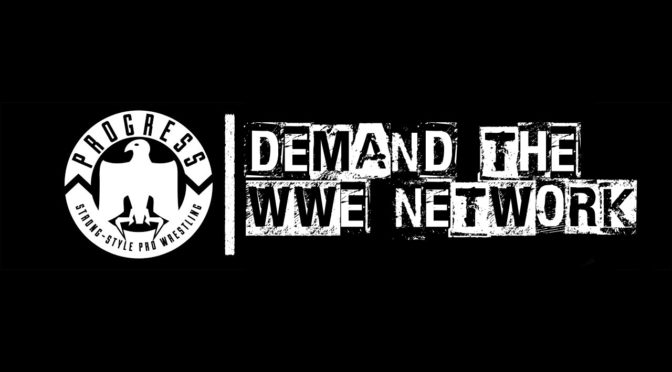 “The WWE isn’t trying to kill the indy scene!”

Sing that song again, it’s my favorite musical joke this side of Bo Burnham.  Thanks to Cage Side Seats’ Henry T.  Casey who accurately documented the last week or so in British Wrestling news, we can see that WWE is making big moves to affect and limit the viability of the British UK scene.  As he describes;

And then this last week in British Wrestling happened:

At the main event of Progress Ch. 93, Zack Gibson (one half of the NXT UK Tag Champs, The Grizzled Young Veterans, with James Drake) emphasized the word conspiracy in a promo where he predicts, accurately, that he and JD will win the Progress tag titles that night, which will make Progress match NXT UK with its world champions (WALTER) and tag champs (GYV). Relatedly, Bate and Seven hold the OTT Tag Team Championships, while James Drake is also a champ at Pro Wrestling Chaos.

NXT UK contracted superstar Eddie Dennis, at Progress Ch. 93, announces he will no longer appear at Progress, despite having the unfinished business of a title shot he won at Wembley.

Voices of Wrestling reports that “NXT UK contracted talent may no longer appear on streaming services. They can work shows, but dark matches only.”

Beloved UK referee Chris Roberts is announced to be leaving Rev Pro UK. His next steps are unknown, though he has refereed NXT UK before, for Ohno vs Gallagher in episode 45.

This all falls under the theory that the WWE is trying to eradicate and replace the UK indy scene, with the NXT UK brand.  They don’t want to kill wrestling in the United Kingdom, that’s silly; they want to replace it.  They want to run their own trains on the tracks that these British indies have made.

In doing so they’ll control the biggest draws and limit accessibility causing British indies to close doors or downsize drastically.  This also falls in line with World of Sport essentially being dead in the water with no second season yet to be announced and many of their talent landing elsewhere.

Thinks took a turn for the worst when British wrestling co-owner Jim Smallman of PROGRESS announced he was leaving the promotion to focus on his work with NXT UK, which was the catalyst for Casey to write the above quoted section.

It’s also looking more and more like PROGRESS could be bought by the WWE, much like it’s been rumored has happened to EVOLVE.  EVOLVE is still considered a non-WWE property but only technically.  They’re now part of their Network, with the WWE airing their Tenth Anniversary show a whole six months early just to compete with AEW.

PROGRESS will be used the same way once a deal is made.  PROGRESS, much like Germany’s wXw recently stopped using licensed music, which is no coincidence.  The European promotions are both on the WWE’s radar and rumor has it that both promotions are set to debut on the WWE Network once things are situated with the inevitable WWE Network tiered payment set up.

PROGRESS and wXw are the two biggest European promotions and have worked really close together in recent years.  They’re both necessary for the growth of European wrestling and if they do both go to the WWE Network, which seems beyond likely, that’ll not just hurt the growing indy scene but will probably cripple it.

It’s hard to imagine the two biggest feds keeping their rebel, punk-rock attitude once they’re corporate sellouts.   British Wrestling and European Wrestling isn’t dead but it’s about to be just another WWE pipeline, so it might as well be.