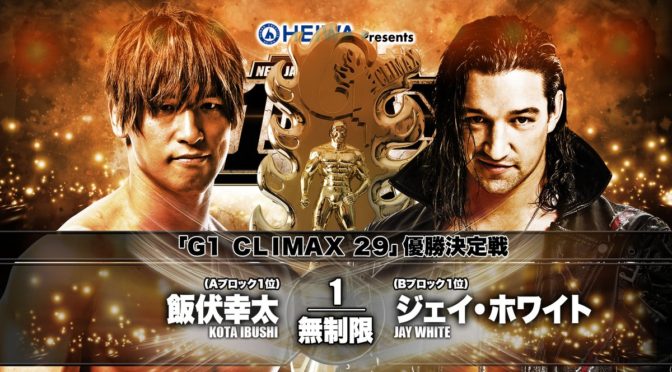 The finale night of the G1 is in the books an boy-howdy.  This was a great night to watch wrestling.  Starting at 2 a.m. EST, the show was gracefully over by 5-ish, which is right around the time the shows usually starts.  It’s also right in my wheel house for my sleep schedule.

The show had some pique moments, firstly the opener.  In a battle of the training dojos, the Japan Dojo and LA Dojo went toe to toe, which resulted in a brawl post match with several Young Lions who were at ringside.  As New Japan custom, the Young Lions aid during the main bouts, often times providing make shift security, or helping the wrestlers in the back and icing them down after matches.  The LA Dojo only saw two members in the ring in Karl Fredericks and Clark Connors, going up against the Japanese Dojo students of Yota Tsuji and Ren Narita.  After Fredericks and Connors won, several Young Lions from the Japan dojo got involved and started a scuffle that had fans on their toes.

They’re rookie and the crowd was eating up everything they were doing.

The C-Block was one of my favorite gags throughout the 29th G1 Climax, often times with Rocky Romero putting over the concept, and keeping fans up to date thanks to ‘some guy on Twitter’ who would send him updates.  The concept is simple; at all G1 events there are a cluster of multi-person tag bouts.  Last year, David Finlay III started this joke that the tag bout participants were competing for the ‘C Block’ title.

The C-Block works like this; if your team wins then each member gets one point.  If you make the pin or apply the submission that ends the match, that specific wrestler gets another point.  I believe Rocky said that Chase Owens ended up winning, though that doesn’t seem right to me.  Owens himself has claimed he has 23 points, via his personal twitter.

I know it’s trendy to dump on Yoshi-Hashi but I was impressed with his booking this year.  Yoshi-Hashi constantly seemed to find himself scoring the submission win for his tag team (when they won) thanks to his butterfly lock. The move gave Yoshi-Hashi a nice boost for a while and started to shift my opinion on the guy.  He’s not a IWGP Heavyweight Championship contender but NEVER Openweight?  Why not?

This takes us to the biggest shock of the night, which is actually two big shocks.  During KENTA’s tag match with the aforementioned Yoshi-Hashi and Tomohiro Ishii against The Guerrilla’s of Destiny and Bad Luck Fale of the Bullet Club, he shockingly betrayed his team – opting to leap down from the ring apron right at the height of a hot tag.  The Bullet Club got the upper hand, after KENTA kneed 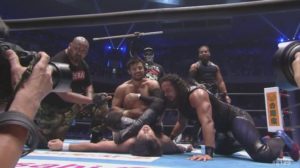 Ishii in the face, giving the Club the win.

This wasn’t that shocking, but as he was about to cut a promo on the crowd, Katsuyori Shibata of all people ran down to attack KENTA.  The move made sense, as KENTA was brought into NJPW by Shibata and the care of Shibata’s Young Lions of the L.A. Dojo was up to KENTA throughout the G1.  Attacking KENTA and the rest of the Bullet Club with kicks and strikes, Shibata had the Budokan rocking as he cleared the ring.  KENTA though got Shibata back and dropped the beloved legend on his back.  Shibata for those unaware, suffered a subdural hematoma in a bout with Kazuchika Okada for the IWGP Heavyweight Championship.  Shibata head butted Okada and caused the brain-bleed in his own head.  The injury caused temporary paralysis on his right side, something that he’s sense overcame.

The return of Shibata had fans expecting a potential return match for the current NJPW Coach, possibly at The January 4th Dome Show.  Shibata took some very risky bumps this morning, so it’s not like he couldn’t go more if he wanted to.  It will come down to what his doctors say; can he sustain a work load in a singles match with KENTA?  That’s the question.  Either way, it was the moment of the weekend.

Finally, Kota Ibushi defeated Jay White to win the 29th G1 Climax, allegedly making him the first person to win the Triple Crown of the NJPW tournaments; The G1, The Best of the Super Juniors and The New Japan Cup.  Ibushi and White had a barn burner, with White using traditional heel tactics to try and win, but Ibushi showing that fighting spirit and overcoming the odds.  Many fans wanted Kenny Omega to make an appearance to help chase White’s Bullet Club teammates away but I knew that wasn’t going to happen.  The Elite (Omega’s group) and NJPW are not currently on good terms.  The Elite (allegedly) complained about the change in leadership when Harold Miej took over and limited their creative freedom.  It was part of the reason why they left NJPW.

Ibushi though now goes onto Night Two of The January 4th Dome Show, also called Wrestle Kingdom and will (probably) face Kazuchika Okada for the IWGP Heavyweight Championship.    Though Okada will have to get past Minoru Suzuki, who represents a new obstacle in the champ’s path.

Overall a great night of action and as this was my first G1 that I watched from the start, I have to say I’m stoked for next year.  I hate having to wait ten days for the next shows, the Super-J Cup; which are thankfully stateside and far easier to stay up for.

#G1 #G1Climax #G1Climax29#NJPW
The last night of the G1 is in the books, what grade would you give the night?