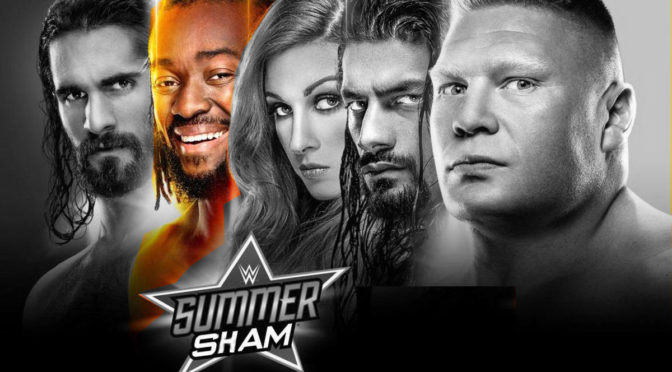 On a day that saw both the end of G1 Climax and SummerSlam, it was apparent that one knew how to do deliver heat and excitement with their angles and matches.  That company was not the WWE.

We didn’t watch #SummerSlam but you did! What was your thoughts on it?

While fans gave it fairly positive reviews, it’s fair to say that the show was not the end-all, be-all of wrestling.  The biggest story that seemingly came out of the night was Matt Riddle again acting like a child.  Riddle told a story on WWE’s “watch-along” stream, and revealed he tried to sneak into Goldberg’s locker room only to be stopped by Big Bill himself.  After being disrespectful towards 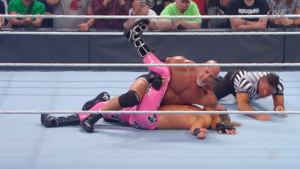 Goldberg, the legend told Riddle they’d have words after his match.  Riddle gleefully shared this story with the audience though no follow up had been given as of yet.

If Riddle’s MMA career is any hint to how the confrontation went, Riddle couldn’t finish.  As usual.

Speaking of which, the match itself didn’t seem to rub anyone the wrong way, except for Jake Hager (Jack Swagger) who called himout on Twitter.  Continuing the trend of unimpressive two-sport crossover combat athletes, Hager took shots at Goldberg despite the fact that Hager is 2-0 against nobodies in Bellator.  Goldberg got the win over Dolph Ziggler, who sold like a champ for Goldberg.

While one legend looks like he’s not done yet in Goldberg, to one that is in Trish Stratus.  Stratus lost her farewell match in Toronto, Canada against Charlotte Flair; apparently retiring for good.  Stratus did get some criticism online for being slower than she was just last year, and not as sharp.  Since this being her final match was tacked on in the last week, it’s fair to say she knew she was far from what she used to be.  Stratus was reportedly training for the last six weeks or so in preparation for last night.  So perhaps she knew she wasn’t able to hang anymore and opted to tell the WWE that she was done after this.

Seth Rollins beat Brock Lesnar clean for the WWE Universal Championship but it left many fans wondering what the point of Lesnar winning the belt and the Money in the Bank Briefcase was.  Clearly Lesnar didn’t need the briefcase and they could’ve given a newer talent a rub with it.  Lesnar didn’t need it, nor did he need to beat Rollins.  You could’ve done the whole angle without Rollins ever losing the belt.  This again just goes to show you that the WWE books from the hip without having a plan.  It hurts the flow of the show and leaves fans with a bad taste in their mouth. 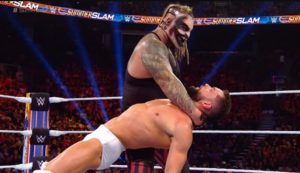 Bray Wyatt got a good reaction, though I personally find his new theme even more annoying than a Lorde song, it got over and that’s what matters.  I’m not sure why people think Wyatt (The Fiend) can actually wrestle though, this is something that’s alluded me as he’s never had a really good match outside of that lone six-man-tag some five-six years ago.  Hey good on him though.  He’s about to have another kid, he’ll probably leave his new girlfriend and child like he left his ex-wife and his other kids and move on to another person.  Because Bray Wyatt isn’t just a great heel as The Fiend, he’s a real life piece of shit.

Speaking of real life pieces of shit, Randy ‘Bragged About Putting His Genitals on Co-Workers Without Their Permission in a State that Defines That As Sexual Assault” Orton took on Kofi Kingston. It ended in a Double Count Out, because the WWE doesn’t realize no one gives a fuck about Orton anymore.  Orton has too much on his plate anyway, with an influx of new writers being hired, Orton has to go greet them.

Overall though, fans gave the show a B, which I think is generous just by seeing reactions on Twitter.   If you’re wondering why nothing else got mentioned, it’s because nothing else really mattered.  The show was over by 10:30, and I didn’t have to watch a single minute of it.  Yay me.