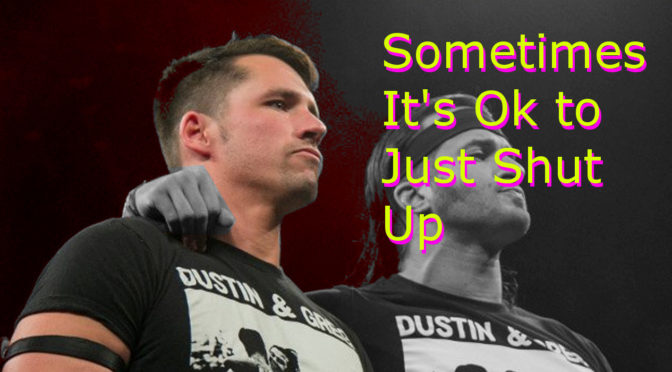 There’s a real problem in the wrestling industry these days when it concerns respect and tradition.  Really it’s an issue in regards to society at large.  Not everything needs to be mocked, belittled or made into a joke.  This is something pro wrestling icon Dave Bautista is hoping to pass down to current AEW tag team wrestler Chuck Taylor.

Taylor has a history of posting sarcastic tweets on his Twitter account that are often self-depreciating or dismissive in nature, however this time he took an unwarranted shot at a famed wrestling location. Taylor tweeted out the following;

I went to Ribera with goddamn Okada and they didn’t give me one of those coats that place ca suck one.

For those unaware what Ribera is, it’s a famous Japanese steakhouse that has long catered to wrestlers going back decades.  In fact the reason why it’s so infamous is that wrestlers making their first treks to Japan often stop in there for a meal.  This is often done at the end of their tour but that’s not a mandatory staple of the tradition.

At the steakhouse, those that run Ribera will often adorn pro wrestlers with the infamous ‘Ribera jackets’, a wind-breaker like, light jacket with the Ribera steakhouse logo on it.  These are seen as very special to not just Japanese wrestlers, but those who tour the region.

Now, we know that Taylor’s tweet is meant in jest, but sometimes there are just things you don’t need to belittle.  This is something Bautista (Batista in the WWE) wanted to remind Taylor of, by tweeting the following at him;

My friend I offer this advice in complete sincerity. Delete this tweet immediately. Our history and tradition with that place is something that’s beyond your years. I’m asking you not to disrespect that over a jacket you didn’t receive. https://t.co/hE3kDzNaHR

Truthfully, Bautista is right.  The tradition with the establishment is iconic in the industry.  Many see it almost akin to a ‘holy-site’ in the world of pro wrestling.  It’s a place that you don’t get to experience unless it’s truly earned.  Unfortunately today’s modern wrestler and wrestling fan no longer  respect the idea of tradition.  The very idea of respect is something to be mocked and belittled.  There’s becoming less and less honor in the industry and even less in the world.

I praise Bautista for standing up for the traditions of a business that was built on such ideals.  Not every old school idea has merit anymore, but this does.  Respecting those that came before you, that’s not something to belittle.  I know it’s cool to be like Matt Riddle and take shots at anything you deem to be worthless, but that’s a really shitty way to live your life.

When you don’t value the past, you can’t appreciate the present.  I’m glad Taylor deleted the tweet but I hope he deleted it because he knew he messed up.  It’s not the action that matters, it’s the intent.

We need to bring respect back to wrestling. We need to go about teaching new generations the right way of handling oneself.  The era of the scum-bag performer needs to come to an end and fast.  The less pedophile-joke types like Joey Ryan, the better.