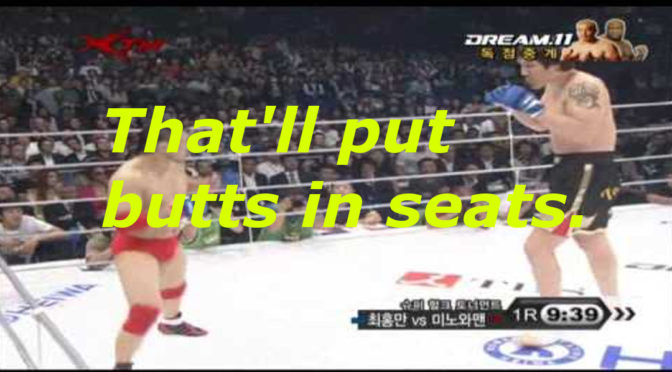 The human form of CTE is coming to Bloodsport III.  Josh Barnett announced that veteran MMA fighter Ikuhisa Minowa is coming to the USA to participate in the Bloodsport event.  Despite his 64 wins, he kinda sucked at MMA.  Having been knocked out 15 times, and taking 114 fights, I’m not sure what the point is of bringing in a guy like Minowa.

It’s not like he’s an actual legend on talent like a Dan Severn.  Though, he’s at least in line with the type of pro wrestler I think Bloodsport should bring in; and yes, he’s a pro wrestler too.

To quote Don West; “…look at all those concussions.”

He’s the 5th generation Tiger Mask but a record of his matches can’t be found.  That’s…encouraging.

Honestly, I’m not sure why Barnett hasn’t reached back out to Severn or Ken Shamrock.  Hell, call Royce Gracie.  He’s not doing shit anymore.  Those guys at least have legacies in MMA that aren’t “fighting freaks”.

I was hoping for better out of the announcements for this third event but I’m so far unimpressed.  However, I’ll still tune in because I’m willing to be proven wrong. Barnett’s got a great mind for this stuff (assuming he’s actually recruiting the talent), and the first “Barnett Presents…” was phenomenal.