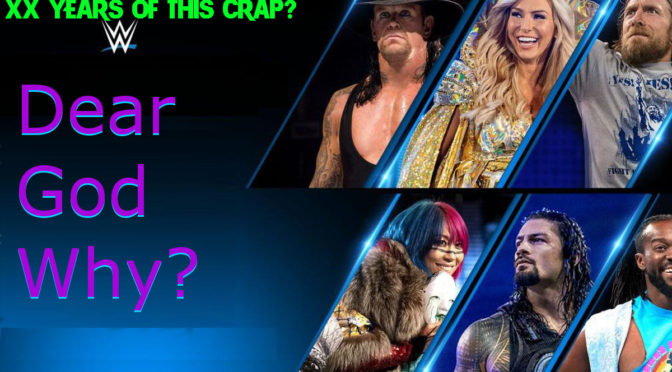 WWE does anniversary and milestone episodes of RAW and SmackDown (and recently even WrestleMania) very poorly.  Do we need to remind everyone what a cluster-fuck the 25th Anniversary of RAW was?

Nothing ever happens on these shows other than parading out talent that are no longer under contract, and somehow are more over than any of the active wrestlers will ever be.

You think Kevin Owens or Sasha Banks will get as loud of a pop as Sting will? Come on.

WWE has announced that SmackDown will celebrate their 20th anniversary on October 4th, which also coincides with their Fox debut.  Never mind the fact that the pilot of SmackDown aired in April of 1999.  Whatever, who cares about things like accuracy, dates, or specifics?  Those are for nerds and people who sneeze, right Vince?

The lineup is the tired cavalcade of more relevant but 50+ year old wrestlers that we see all the time.  No one told the WWE that having decades worth of content available for fans to watch make seeing older talent not as important if they’re just doing a cameo spot.

Talent like Hulk Hogan, Sting, Ric Flair, Booker T, Lita, Mick Foley, Kurt Angle, Bill Goldberg, Trish Stratus, Mark Henry, and Jerry Lawler are all booked for the event.  So are The Undertaker and Brock Lesnar.  Lesnar at least makes sense, as the rumor has it the folks at Fox want Lesnar on SmackDown.

I love Sting, Booker T, Kurt Angle and Goldberg but even I don’t care about their presence.  If they’re just dong one-offs, then what’s the point?  Why not just watch the talent at their prime on the WWE (or IMPACT) streaming services?   What good does a balding, crippled Ric Flair provide anyone other than the realization that we’re not young and vibrant anymore?  It’s depressing and doesn’t do anything for the long term success.

Look at New Japan, easily the #2 promotion globally.  They’ve got a hot product that fans are clamoring for more of.  They’re growing their fanbase, unlike the WWE.  Think they’re parading Great Muta or Masahiro Chono to goose the gates?  Hell, they have a slew of 45+ year olds on the roster and they’re always on the under card, stuck in mid card matches.  Why?  Because NJPW doesn’t rely on older talent to generate revenue.  They put over the new stars and then take their reduced roles with grace.  It’s quite dignified.  They don’t have to watch a bald HBK or a decrepit Dead Man try to squeeze out one more Blood Money pay day.

The difference between sports entertainment and THE SPORT of pro wrestling.  Happy 20th birthday to SmackDown.  You’re old, and it shows.