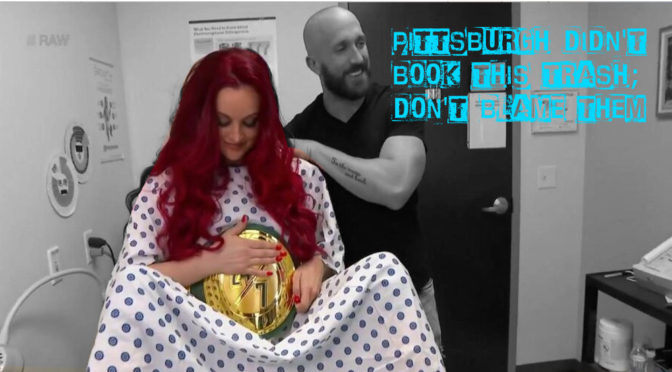 After every show that airs, and often during, fans take to Twitter to talk about how great or poor the crowd is in attendance.  Last night during RAW, many people online complained about how bad Pittsburgh’s crowd was.

The fans that showed up though deserve a break.  Why? Let’s go through the reasons.

Firstly, Seth Rollins is a un-entertaining as he is a douche bag.  He’s NEVER been a good promo guy in his entire career, and this whole “he’s the face of RAW” angle is tragic.  His boyfriend, Becky Lynch, has become so stale and unlikable that it’s making this one-note reporter look like a genius for calling this exact outcome last November.  You don’t get over by getting your ass kicked.

Not unless your name is Conor McGregor.

Thirdly, what were the two big angles billed for tonight?  Roman Reigns suffered a work place accident, where the entire angle unfolded on Twitter and WWE.com prior to the show.  Yawn.  The other big angle?  Maria Kanellis visits her OBGYN.  What the fuck is this, TLC?  Are we going to have Mickie James on next, talking about her 140 Pound Life?   What is this shit?

Then on RAW, you know what happened?  Same thing that always happens, REMATCHES.

You had two stand out moments, and that doesn’t make them good just noteworthy; Bray Wyatt wore his Fabricio Werdum (Google him) mask to the ring to attack Kurt Angle, and every fan got to see their wet dream come to life as Roman Reigns was hit by a car.  (You people need counseling).

All the while Samoa Joe was all “…noo…don’t get up…it was someone else…it totally won’t be me in the end”.   Oh, did I ruin the angle already?  Come on, if it’s not Samoa Joe and his mom jeans that’s behind the attacks, I’ll eat my hat.

I don’t own a hat that I’ll eat, but you get the gist.

Simply use the Steiner Math Formula and instead replace that first 33.3% by 24/7, add Vince McMahon’s narcissism and alleged predatory behaviors, divide by the number of women Seth Rollins has sent his dick too, subtract by Seth Rollin’s alleged 4.5 inches, and put that over the price of a Yano DVD in dollars; and you get the answer.