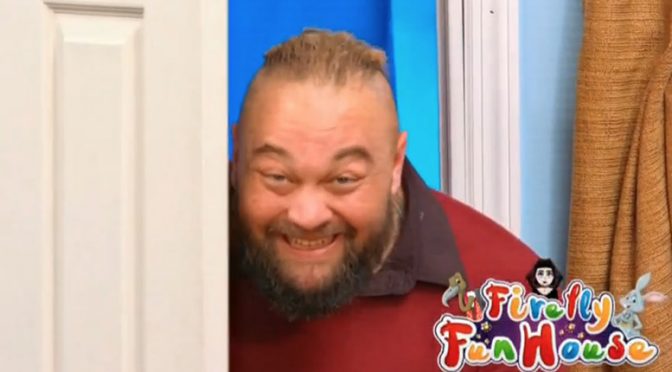 For those who havne’t seen, and aren’t you the lucky ones, Bray Wyatt returned to television screens on RAW with the Firefly Fun House.  A twisted take on iconic kid shows like Mr. Rogers, Pee Wee’s Playhouse and others.  In the vignette, Bray Wyatt waltz’s into his “house”, that looks like Blues Clues was filmed on location with the Bundy’s from Married With Children, and re-introduced himself to the soundtrack of kids cheering him.

He explains who he is, who he was, and that he’s “good now”.  It reeks of Channel Zero on SyFy, but whatever.

The point of this gimmick is to make Wyatt a creepy heel, someone who can enchant children, I guess?  Yet there’s an underlying problem with this whole gimmick, and with Wyatt as a whole; He sucks at promos.

Just because you can randomly “SHOUT” words at people, doesn’t make one good at promos.  In fact, it highlights the big issue here.  Wyatt’s promos weren’t nonsense by accident, but by design.  The wannabe Waylon Mercy never had a point to make.  He spoke nonsense because he didn’t know how to get anything across.

That’s now more evident than before.  Wyatt’s mannerisms didn’t come off as creepy or evil, but rather uncomfortable.  As in he was clearly uncomfortable trying to act.  He never acted as Wyatt, he just shouted and laughed.  He showed as much range as a Chuck-E Cheese animatronic.

Everyone gobbled him up at first and proclaimed him a “great” mic worker, but that soon faded.  He went from the new Undertaker, to the new Ultimate Warrior.  Which is the perfect comparison for whom Wyatt emulated the most.  The nonsense ramblings, the insane content and the inability to drive home a point is literally The Ultimate Warrior.

No one called Warrior a good promo guy.  Yet, people call Wyatt one.

Wyatt’s real life brother Bo could pull this gimmick off.  Unlike Wyatt, Bo has the ability to make a promo work, and already has experience with a slightly similar gimmick of ‘Bo-lieving’ in yourself.  Somewhat in line with Bray hanging out with kids.  I guess.

This gimmick has no legs, because the company has no balls; creatively speaking.  They’ll soon abandon this once it’s clear Wyatt can’t carry it and he’ll more than likely go back to his old persona, with a twist of course.

And honestly, the worst part here were the puppet voices.  You couldn’t give the buzzard a high pitch voice?  I mean, come on.