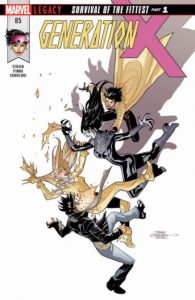 Orville-Trek? – “Orville” is the Seth McFarland comedy parody of all the classic “Star Trek” t.v. series. At least thats how fans are viewing it. It’s shot like “Star Trek”, with the same , the same gimmick, the same everything. It’s just not “Star Trek” and it’s supposed to be funny. The similarities aren’t lost on fans, and they asked the obvious question; will there be any cameos? Well during McFalrand’s AMA, he revealed that yes, there would be some, saying;

We got one or two in the lineup…

Major Character Debuting on Arrowverse Crossover? – Marc Guggenheim likes to give us spoilers. Last year we heard rumblings that when the JSA were announced, they’d be bringing together a familiar cast of characters. While some of what we got was expected, it wasn’t the complete package. Most notably, the lack of Sanderson Hawkins or any other character known as The Sandman was noticeably lacking from the show. However season three looks to change that, as they’re now including The Sandman into the crossover episode of “Legends of Tomorrow”. No word yet on if it’ll be a modern version, or another character from the past, but at least we’re getting something.

Generation X Reunion? – Marvel is trying very hard to earn back their fan base, and one of the ideas they had was to reunite the original “Generation X” lineup from the mid-90’s. The title was announced to be returning but with a relatively new lineup. You can check out the synopsis below.

OG Gen X Part 1
Christina Strain / Amilcar Pinna
Cover by Terry Dodson
You’ve been asking for it! You’ve been waiting for it! And now it’s here…the original Generation X is back! But this is no happy reunion for any of them. Their former teammate Monet is now bonded to her brother, the vampiric mutant called Emplate. Will Jubilee, Chamber, and Husk be able to save Monet? Or is she forever lost to her brother’s curse?

Quick Hits – Doug Jones tells interviewer “The Shape Of Water” will have an amphibian man on woman sex scene. A “true Lies” t.v. show is in development at Fox thanks to the likes of James Cameron, McG, Jon Landau, Rae Sanchini, and Mary Viola.