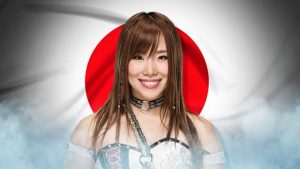 Kairi Sane Speaks – The Bleacher Report recently interviewed Mae Young Classic tournament winner Kairi Sane, who discussed the message she wants to send after winning and what she told her opponent Shayna Baszler after their match in the finals. Here is what she had to say…

“I respect her so much and I told her that. I told her I was happy and I appreciated this chance. Both of us told each other, ‘Hopefully, we will have more chances, more competition in the future.’”

“The women’s revolution, I respect that very much. I keep encouraging fans and, beyond that, women in general. I want to convey the message: women are strong. In the end, I want more people to know and recognize women’s wrestling. I want to be a leader representing all strong women in the world.”

Robbie E Speaks – The Two Man Power Trip of Wrestling podcast recently interviewed Robbie E, who commented on his current GFW status. Here is what he had to say…

“I am still 1000% with GFW. I think it is just as simple as Jeff came back, he’s back in charge and what he wanted to do is revamp the product. Now he is finally going in a direction that shows stability and the right people are there and the story lines are going to start to add up and revamp the whole look. New colors, new entrance way, new ropes and of course some new faces and with having new faces you’ve got to give the old faces a break. Myself, Bram, Zima have kind of been taken off TV to be brought back and the cool thing for me is that I am going to be better than ever.”

Lodi Retires – PWInsider reports that former WCW wrestler Lodi announced his retirement from wrestling at last night’s Palmetto Championship Wrestling event in Columbia South Carolina. Lodi recently had to undergo his third neck surgery. Lodi announced that he would be retiring from in-ring competition and he’s going into public speaking. After Lodi made the announcement, one of his former trainees, Brady Pierce challenged him. Jacob Ryan made the save and beat Pierce in an impromptu match.