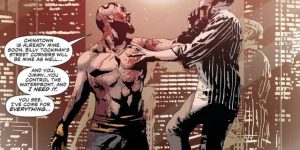 Today has been one of the busier days in a long time, so pardon the lateness.

‘Arrow’ Cast Richard Dragon – Kirk Acevedo will be joining the upcoming season of ‘Arrow’ as Richard Dragon, the seasons main villain. Acevedo is no stranger to comic related material, as he was on “The Walking Dead” previously. The character’s official breakdown describes him as;
A hardened ex-con recently released from prison for crimes he didn’t commit, Ricardo Diaz (Acevedo) is bent on taking over Star City’s criminal underworld. A master in hand to hand combat, honed by years of life on the street, Diaz has yet to meet a foe he can’t take down

Sam Jackson News – Samuel L. Jackson has apparently revealed his status for the next two Avenger films, and he’s not happy. Apparently Marvel right now has no plans to use Jackson’s Nick Fury. Jackson said;

I wasn’t in the ‘superhero argument’ movie [Captain America: Civil War], I’m not in Avengers 3 and 4,. They’re shooting them now, and they haven’t called me yet.

They wouldn’t let me go to Black Panther-ville, so it’s kinda like how you gonna make a black Marvel movie and not let Nick Fury show up in it?!

Quick Hits: “Orville” star Haltson Sage is expected to debut as Dazzler during the events of “X-Men: Dark Phoenix”. Mike Moh lied about being able to swim in order to play Triton. “Gotham” released the first images of Crystal Reed as Sofia Falcone.