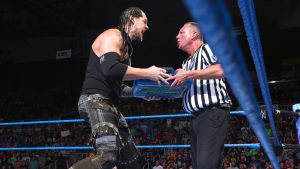 Geeze, no news tonight, but I did the best I could.

Baron Corbin Cashes In – Last night Baron Corbin tried to cash in his Money in the Bank briefcase, but ended up losing due to interference from John Cena. Outside of the angle, many are wondering why Corbin dropped the briefcase so fast. The speculation is rampant and after talking to a few, even those in the know aren’t sure what the reason why, but they all have the same take; the WWE doesn’t see him as a Heavyweight Champion and don’t believe he’ll reach that mountain. If they did, they would of kept the briefcase on him. However, that doesn’t mean those in the office won’t change their mind eventually.

It should be noted that Road Dogg, aka Brian Gerard James, was the one who campaigned and fought for Corbin and Road Dogg apparently now is getting some backlash for pushing so hard for someone that no one else thought that highly of.

Tyrus Unhappy – Tyrus is ‘holding out’ due to creative differences he’s had with Global Force Wrestling, this despite the fact Tyrus was finally put in an angle with Kongo Kong. He says he’s felt ‘handcuffed and treated like a ‘second class citizen creatively’.

Opinion: Tyrus isn’t that valuable to GFW as a name, so he’s taking a big gamble.

WWE Unveils First 47 Playable Wrestlers – The WWE has released a video thanks to IGN revealing the first 47 wrestlers in WWE 2k18. The entire released roster is below.

Quick Hits – Despite WrestlingINC claiming otherwise, there is no plans at the moment to bring Alberto El Patron back to television at Destination X. GFW broke one billion views on YouTube. Sting “cannot complain” about his last match with Seth Rollins at Night of Champions 2017.