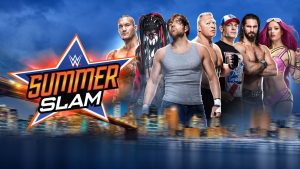 Injuries, Enzo and El Patron getting slammed by a microphone. Oh it must be Monday.

WWE Loses 2 for SummerSlam – A bad looking SummerSlam card got worse, as Bayley and Scott Dawson are now being ruled out for the summer event due to shoulder and elbow injuries respectively. This affects two of the bigger matches, as Bayley was set to face off with Alexa Bliss for the RAW Women’s Championship, and Dawson was apart of a three way that involved The Club and The Hardy’s. Now that match will be come a standard tag match, while it’s expected that Sasha Banks will be inserted into the Women’s match, or possibly Nia Jax.

Opinion: This is a rough loss for the WWE, as these two matches were going to help round out the show a bit.

GFW Star Slams El Patron? – GFW is touting their shows this weekend as a success, and at the second event on Saturday, Eli Drake cut a promo in Staten Island about Patron. Drake essentially called into question why anyone would want Patron as the face of their promotion, and when he asked the crowd if he should be the face instead, the fans were fully supportive. While no word on if Drake did this on his own or not, what we know is that Drake is not the kind to go rogue. Drake has a reputation as being a ‘company-guy’ doing what’s asked of him and doing it because he knows he’s playing a character. So the idea of him going off script like Samoa Joe did at Turning Point 2007 is unlikely.

Opinion: I don’t believe he’s the kind of guy to go off script, and with rumors that GFW and the higher ups are fed up with Patron already, it makes sense that Jeff Jarrett or someone in charge told Drake to go after Patron.

Update on Enzo – Sports Illustrated’s Extra Mustard is reporting that there have been other ‘offenses’ by Enzo Amaore. Apparently Enzo has brought a “…series of questionable guests…” backstage to several WWE events. These guests are accused of taking photographs, and filming themselves backstage. The belief is that ‘…Enzo should know better’. Some believe that this will lead to Enzo getting fired.

Opinion: For all the reasons to hate a guy, I feel like this is the least respectable reasons. If you look at the history of the people who have issues with Enzo, I bet it’d be hard to really justify their disdain for Enzo when looked at their own issues.

Quick Hits – Jim Ross unsure if the WWE will have a problem with Ross continuing his NJPW work on Axis, and is noted that Ross’ Axis contract runs through 2018. PWInsider is claiming that Kingston remains with GFW. Ryback won the Rock ‘N’ Roll Wrestling Heavyweight Championship this weekend in Australia. WWE releasing an Issac Yankem DDS action figure.