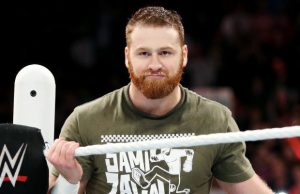 Sami Zayn Speaks – In an interview with Main Event Radio (via Wrestling Inc), Sami Zayn spoke about a multitude of subjects. When he was asked about who he wants to see called up from NXT, here is what he had to say…

“I think Bobby Roode has been doing really well so I wouldn’t be surprised to see another Canadian coming up with us pretty soon.”

He also spoke about how it felt like to main event a match in Montreal as well as his #SamiForSyria campaign and his match with Shinsuke Nakamura at NXT TakeOver: Dallas last year during WrestleMania weekend.

Updates On Cena And Orton – WrestlingInc.com reports that John Cena and Randy Orton are both off for this weekend’s WWE house shows. Orton and Cena are both currently advertised for next week’s edition of Smackdown Live set for Tuesday, August 8 at the Air Canada Centre in Toronto, Ontario, Canada.

Finn Balor Update – According to a Sportskeeda report, Finn Balor is set to face Bray Wyatt at the PPV event later this month, and Balor will bring back the Demon King for the match. Balor has not used the Demon King persona since last year’s Summerslam event, which saw him beat Seth Rollins for the Universal title. After the match, Balor was injured and out of action for a number of months, sidelining him from making a quicker return for the Demon King character. Additionally, this year’s Summerslam is being held in the same arena as last year when Balor won the title and was subsequently injured.