Here it is, everything you missed from this weekend. Some interesting stuff, and some boring stuff. Oh well. That’s life.

Tyrese Hates Us – In a move that’ll make no one happy, Tyrese Gibson has confirmed that he’s talked to Warner Bros. about playing John Stewart in the upcoming DC Comics adaptation of the “Green Lantern Corp” movie.
Gibson spoke about this saying;

I would love to do it. You know, I had a couple meetings at Warner about it. I just think that they’re still trying to figure out what the move is. I would love to officially confirm, but I can’t. And if they go in a different direction, I think they know what’s best for the movie, but the fans started this campaign, and all I’ve done is made use of my social media to let folks know I’m interested.

Doctor Who Unveils First Female Doctor – In a move that’ll be unnecessarily over-supported and over-criticized, the BBC announces that relative unknown actress Jodie Whitaker will take over the role as the Doctor. Surely fans who’ll criticize the decisions will be called sexist and those that support it will be called social justice butterflies.

Personally, I don’t care. You could have a three breasted alien performing juggling on the show and I wouldn’t care.

Thanos’ Henchmen Revealed – The poorly named characters of the Black Order have been confirmed for the upcoming “Avengers: Infinity War”. The characters, Corvus Glaive, Proxima Midnight, Ebony Maw, and Cull Obsidian (known as Black Dwarf in the comics) can be seen below. 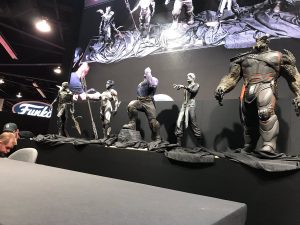 Avengers 3 Description Revealed – Despite the fact it’s hard to know sometimes, no, we’ve only had two Avenger films. The third is supposedly ‘epic’ but considering it’s the same bland characters from the MCU that everyone is ga-ga about, I’m sure it’ll get a lot of undeserved hype. Here’s the description of the trailer shown at the Disney Expo.

We’ll learn more about Thor and the Hulk in Thor: Ragnarok, but the Infinity War trailer opened with the Asgardian being flung against the windshield of the Milano, the ship commanded by Star-Lord (Chris Pratt) from Guardians of the Galaxy. “Get it off!” shouts Rocket (voiced by Bradley Cooper), as though a particularly ugly bug had been smushed there.

Mantis (Pom Klementieff) brings Thor back to life, and he promptly greets out Guardians with an unfriendly, “Who the hell are you?” (To be fair, Star-Lord had just told his fellow Guardians, “This might be dangerous, so let’s put on our mean faces.”) It then seems like Thor joins forces with the Guardians to guide them to Earth, where we see the following things go down, in quick succession:

Scarlet Witch (Elizabeth Olsen) seems to cut a flaming car in half. It looks like her beau Vision (Paul Bethany) might be trapped nearby, and to judge from their faces, something sad and bad is going down.

“Death follows him like a shadow,” we hear, as Josh Brolin’s ultimate villain Thanos is teased.

Suddenly, Tom Hiddleston’s Loki appears, cutting through flaming wreckage to grab the Tesseract, which holds one of the Infinity Stones. Is this what Scarlet Witch and Vision were trying to prevent?

Next, there’s a glimpse of Tom Holland’s Peter Parker on his school bus. The hair on his arms stands up. How’s that for some trouble-activated spider-sense?

“He’s come to us,” someone says, as some alien ships crash land on a wrecked Earth. A worried Mantis stands with Iron Man, Thor, Doctor Strange, the Hulk, and the other heroes as the aircrafts approach.

“This does put a smile on my face,” intones Thanos, as Gamora (Zoe Saldana) takes in the wreckage of the room kept by the Collector (Benicio del Toro). More Infinity Stones pillaged.

And that’s when Thanos walks through a portal onto Earth — big and hulking and boasting a shit-eating grin. Star-Lord and Doctor Strange (Benedict Cumberbatch) leap into action, harnessing magic and airborne stepping stones. Even Spider-Man swings into action, wearing a cool new suit … perhaps the one teased at the end of Spider-Man: Homecoming?

Briefly, we see Black Widow (Scarlett Johansson), who’s blond now, and Captain America, who’s bearded. Listen, I know the fate of the universe is at stake, but don’t we all feel a little refreshed after spending valuable time on an undercover makeover? Talk to Wonder Woman about that, she knows what’s up.

In the final moments, things get truly heightened. Thanos grabs Thor’s head in his meaty paw and regards it like a grape he’s about to smush. Maybe he saw that scary black-and-white episode of Twin Peaks and wants to practice storming radio stations and breaking open heads?

“You can run from it,” growls Thanos, “but your destiny still arrives.” And then he holds up one hand and seemingly destroys a planet far away in the sky — or, if this scene is taking place on Earth, our freaking moon — and heaves the remains of it at our Avengers in a single shot.

Quick Hits – ‘Spider-Man: Homecoming’ to cross $200 million in the U.S. D23 Expo’s Theme Parks and Resorts panel confirmed that Guardians of the Galaxy: Mission Breakout attraction coming to the resort. Mena Massoud and Naomi Scott will play Aladdin and Jasmine respectively in live action remake of “Aladdin”. Mark Ruffalo and Kevin Fiege have different opinions over whether standalone Hulk movie will ever again see the light of day.