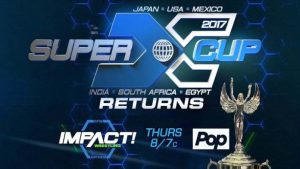 While some companies struggle to get their high flying divisions off the ground, Jeff Jarrett and the rest of the newly named Global Force Wrestling, or GFW have revitalized their entire X-Division in a matter of months. The former TNA staple division was filled with young and up and comers heading into 2017, but not many established names. Caleb Konley, Andrew Everett, Trevor Lee, and the defacto unit leader; DJZ.

However, since Jarrett’s return to the company he helped build to be a true and viable alternative in the early to late 2000’s, the division has rose to once forgotten glory.

The four ‘cornerstones’ of the ‘new’ era are still there, but they’re joined by some elite level talent. Rejoining the Division he helped establish is Low Ki, a 37 year old five time former X-Division champion (who’s ranked #8 in our Best all time X-Division rankings), longtime “…bridesmaid but never the bride”, Sonjay Dutt – who just recently erased the ‘greater X-Division wrestler to never hold the title’ moniker. Then we have former star and could of been so much bigger in the Division’s history, Matt Sydal. The 34 year old, former ROH and WWE wrestler is in GFW now to try and do what he sought to do back in 2004 and that’s become a real player a in a division meant for him.

But now they’re joined by an even more dangerous group than ever before. Eddie Edwards, while not a full time X-Division wrestler is a rare Triple Crown Champion in this promotion, joining only AJ Styles, Kurt Angle, Samoa Joe, Abyss, Austin Aries, Chris Sabin, and Eric Young. Also in the division these days is one of the Super X Cup competitors, Davey Richards, Eddie’s former teammate. Davey has yet to taste single’s gold in GFW, but has been half of the greatest tag team since 2014.

You then have the young up-starts like Idris Abraham, Sammy Guevara, Dezmond Xavier and ACH. And if the young blood doesn’t have you running, Taiji Ishimori and Drago will certainly bring some unexpected dominance to the division. The two foreign stars are two of the best wrestlers in NOAH and AAA respectively, and will stop at nothing to win the X-Division championship. For further evaluation, Ishimori is the current Pro Wrestling NOAH Light Heavyweight Championship, a title he’s held twice prior.

The Super X Cup, which will feature Ishimori, Drago, Richards, Everett, Abraham, Xavier, Guevara and ACH is the essentially launching point of the division, anew. The first one in 12 years, this tournament often made wrestlers into stars, and it looks to do the same thing for one of these young men.

So needless to say, you don’t even need to win the tournament in order for it to be a huge moment in your career. So many names were catapulted by this tournament, regardless of where they placed. The winners though? They had a rocket strapped to their backs.

So it should be no surprise that as GFW emerges from the wreckage that was the last six-plus years of TNA’s past, that the folks running the company would seek to rebuild the X-Division.

The X-Division defined TNA, and with a little help from Jeff Jarrett and Scott D’Amore, it’ll once again define the company, even if it’s letters are now GFW.