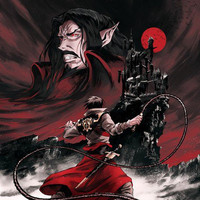 I’m a fan of the Konami video game series. Catlevania’s ‘I’, ‘Super’ and ‘Lament of Innocence’ rank up there for me as some of my favorites, however I don’t pretend to be that well read when it comes to the hand held games, and ergo, my Castlevania franchise history is missing some holes.

That being said, I found myself highly intrigued by the announcement of this series, as it was done in a similar art style to Netflix’s “Voltron” and of course involves the titular game franchise.

The series is based around four main characters, the legend Trevor Belmont, Dracula, his son Alucard and Sypha Belnades. The four of which are bound together during the events of 1476, in the country of Wallachia (Romania). Dracula’s wife is burned to death by the Catholic Church due to her interest in science and technology she received from her now husband, Dracula.

After finding out his wife is dead, Dracula decrees they have one year to leave Wallachia, or face his wrath. A mercy he only bestowed upon the country out of the respect he had for his now departed wife. His son, Alucard, attempts to stop his father but is badly wounded and is forced into slumber to heal.

Trevor roles into the last major town still standing, and at first shows no desire to help, rather wanting to get fed and drunk and then be on his way. His lack of empathy stems from the Church banishing them for essentially being jealous. That leaves Sypha, the granddaughter of the Speakers leader, and a powerful magician in her own right.

The events very similarly set up the beginning of “Castlevania III”, and does an adequate job explaining the lore around the Dracula castle and his own power.

The show does stumble though, and as faithful as an adaptation this is, it’s fairly bogged down by being too stretched out. Too many of the episodes involve unnecessary scenes that further delay the point. In the final episode, the pair of Trevor and Sypha have a Looney Tunes like tumble down a hole that leads them to the catacombs where the “sleeping warrior” lays.

The action though, is top notch. Bloody, violent, and filled with a bit of “awe” that really drives home what you’re seeing is other worldly to a degree.

The only character with any real substance is Trevor Belmont, who is both a drunk, a comedian, a slayer and a nobody. He’s smart, yet aloof but does bolst he’s never lost a fight to man nor beast. Dracula is a stock villain, who you don’t actually see after the first episode, though the scenes he was in he stole. Sypha is the standard “something to prove, don’t disrespect out ways” type that the male lead will ultimately win over.

The best character though may be Alucard, but again, like his father, you barely see him.

The main antagonist for the first block of four episodes (another negative, too small of a season), is really the Bishop of the Church. It was his decision, made out of hatred and jealously, to kill Dracula’s wife. He then forsook the Speakers and ordered their deaths, and he even attempted to have Trevor exiled (again) and then killed. Douche bag of the week material, right?

Overall this show does have many misses but also many hits. None more bigger than the fact that it FEELS like Castlevania. The mood, the music, the designs, the costumes, the gothic-nature of the landscape. It just felt like you were in that once great universe.

Overall, I’d give it a C, with room to grow. As the second season is on it’s way, and will consist of at least eight episodes, we’ll be able to adequately measure and rate the show then. Treat this more like a prequel/prologue to the actual series.

However, if we’re waiting more than a few months-half a year for the next bath of eight, then this grade will drop.