I hope all of you enjoyed your Fourth of July, it’s New Comic Book Day, and I’m not too hot. So, yeah. Let’s hop in.

This season, I want to get back to Cartman dressing up like a robot and [screwing] with Butters, because to me, that’s the bread and butter of South Park: kids being kids and being ridiculous and outrageous, but not ‘did you see what Trump did last night?’ Because I don’t give a … anymore. We probably could put up billboards — ‘Look what we’re going to do to Trump next week!’ — and get crazy ratings. But I just don’t care.

It’s also just gotten boring. We weren’t ever really that show. We would do an entire season, and there would be one moment that played off something that had just happened, and people would go, ‘South Park is the show that does that.’ And that’s just not true. We’re not.

Matt Reeves Credits Christopher Nolan for Vision – Matt Reeves is the next man to helm the Batman franchise, replacing Christopher Nolan, who did a decent job. Reeves was apparently a fan of the Nolan movies, as he cites Nolan as he moves forward. Talking to Yahoo, he said;

What I love that [Nolan] did was that he took the genre seriously. What studios are willing to make at the moment is a very, very narrow band of films. What I discovered is that this genre has the potential to be about something more. You can use the metaphors of the genre to talk about [a lot]… I think that the metaphors of both of the franchises [Batman and Apes] enable you to tell stories that have deep emotional resonance. That’s actually what excites me about it.

I think the other thing that I really admire in what [Nolan] did was knowing what it is to make a big studio film, which often can fall into that sense of committee filmmaking where there’s an anonymity to the point of view of the film.

‘Death Note’ Talks Impact – Fans are stupid. They really are. Japanese X-Men? Of course they’re going to be Japanese. However, move a Japanese story to the United State, and oh my god. Watch the faux outrage start. That’s what Netflix’s “Ghost in the Shell” is dealing with. Despite casting many different ethnicities for the U.S. version, the “moral majority” have hounded Netflix for “white washing” (one of the main protagonists is black…but sure, white washing…) The director of the series, Adam Wingard spoke openly about this to IGN, saying;

In the early stages of the film I was rereading all of the manga, really just looking at how does any of this translate to the United States. Ultimately, Death Note is such a Japanese thing. You can’t just say let’s port this over and it’s going to all add up. They’re two different worlds completely. Ultimately, whenever I say it’s about America, I’m looking at it like, what are the main kind of core issues going on in America. What are the things that people chalk up to conspiracy theories? What kind of weird underground programs does the government have? How do those work in the world of Death Note?

Addressing more about handling a faithful adaption, he said;

It’s one of those things where the harder I tried to stay 100 percent true to the source material, the more it just kind of fell apart… You’re in a different country, you’re in a different kind of environment, and you’re trying to also summarize a sprawling series into a two-hour-long film. For me, it became about what do these themes mean to modern day America, and how does that affect how we tell the story. Ultimately, the cat and mouse chase between Light and L, the themes of good, evil, and what’s in between the gray area. Those are the core things of Death Note, and that’s really what we went for.

Prequel For Harley Quinn Coming – “Batman and Harley Quinn” to have prequel comic titled “Harley Quinn and Batman”, which will be digital-first upon release. Ty Templeton and Rick Burchett will write and illustrated the title. After the movie drops on August 15th, the title will switch back to “Batman and Harley Quinn” and that’ll feature a seven-part sequel from Jeff Parker, Craig Rousseau, Luciano Vecchio, Amanda Deibert, David Hahn, Dario Brizuela, Matthew Dow Smith, Sandy Jarrell, Ty Templeton and more. Below is the summary of the series. 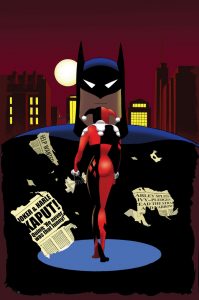 It’s the team-up we’ve been dreaming of as the cute psychopath Harley Quinn joins the brooding Dark Knight for a brand-new Digital First comic series, HARLEY QUINN AND BATMAN. The series, from Batman writer Ty Templeton and artist Rick Burchett, is an exciting new five-chapter prequel adventure to the Batman And Harley Quinn animated film coming out this August from Warner Bros. Home Entertainment.

Harley Quinn is a legend in her own mind, so when she realizes the Joker thinks of her as a sidekick, she takes her revenge. Harley’s now faced with a hard decision to break out as her own super-villain, and she’s willing to go for it!