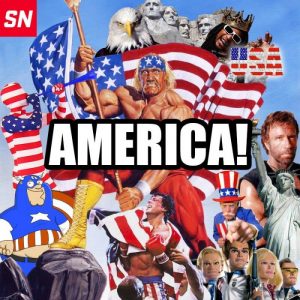 With a remarkable lack of news today, being the 4th of July and all, I’ve decided to combine them into one article for you, the readers at home.

Lashley Leaving Wrestling? – There might of been extenuating circumstances in regards to why Alberto El Patron left Slammiversary XV with the title. Apparently the folks at American Top Team, the organization that Lashley fights for, have talked to him about pursuing MMA full time. The switch to full time would make him inviting to the UFC, who’s struggling with top stars. Lashley has proven himself to be a comparable fighter, amassing a 15-2 record, going undefeated over the last five years, with only one decision loss in the last seven. He’s only been dominated once, against Chad Griggs, which was his first official loss after five straight wins. Lashley would be someone that the UFC would want, unless Bellator finally got around to bringing back the Heavyweight Title.

Former Star Returning to the Ring – Due to a storyline between Battlarts Wrestling Academy and Destiny Wrestling, Santion Marella will be returning to the ring with current GFW World Heavyweight Champion, Alberto El Patron. He retired back in 2014, and left the WWE in 2016.

WrestleCorp – IWGP Champion Okada was backstage at RAW, JUST VISITING HIS FRIENDS. Like Shinsuke Nakamura was doing Saturday at GFW’s fanfest. Gail Kim plans to retire at the end of the year. Grado has resolved his visa issues and is back with Global Force, while Rockstar Spud is currently resolving similar issues. PWInsider claims the ‘Broken’ gimmick isn’t as close to being WWE bound as previously thought.

ComicCorp – Stallone hints at the son of Drago being involved in the sequel to Creed 2. The title of the film might be “Creed II: Sins of the Father”.