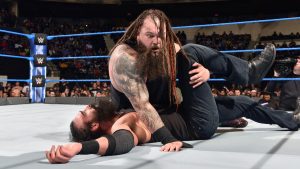 *Que the sarcastic inflection*. Oh boy, just what I like…pro wrestling scandals. That being said, it’s news and we talk about the news here.

Bray Wyatt Caught Cheating – This is so much deeper than just Bray Wyatt, man. Apparently Wyatt, a married father of two, was sleeping with WWE ring announcer, JoJo Offerman while married to his wife of five years. Offerman, herself, was/is still dating Jake Carter (son of Big Van Vader) during the claimed portions of infidelity between the two of them. This shouldn’t be too surprising, as no wrestler ever stays faithful it seems. It’s why you see so many people in the business date within the business. However, even then you’re not guaranteed anything. Just a heads up to anyone wanting to get married, or wishing they could get married to a pro wrestler. Don’t.

Bray’s wife, Samantha, is demanding the familial home, child support and alimony. Normally I’m against the idea of alimony, but if you bail on your wife for someone younger, and thereby neglecting your duties as a father, I say fuck you – pay up.

Bray is attempting to get an injunction on the case to stifle the negative impact this will have on his career. It should also be noted that JoJo is currently sponsored on Instagram by a scheme of sorts. Turns out the WWE might of been right with their idea to not let teenagers on the road with the WWE.

WWE Star Suffers Neck Injury – Despite suffering a neck injury at the Download Festival event in 2017 at Donington Park in Derby, England, it appears Mark Andrews injury isn’t too bad. The official press release stated that he was quickly evaluated by WWE medical personnel, before going on to get a CT Scan, that revealed bruising but no major injuries. I wouldn’t be surprised if Andrews is out for a few weeks to allow the bruising and swelling to subside.

Ring of Honor Star Gives Credit to Impact for Women’s Wrestling
– Ring of Honor female star, Kelly Klein is taking a unique, but accurate take about her thoughts on who really started this “women’s revolution”. Klein, who is hopeful for more opportunities in pro wrestling, praises Impact and how they’ve built a strong women’s division before it was cool. She’s quoted as saying;

I think the WWE has done and is doing great things for the women’s revolution. But, at this point, I think it is more a collaborative effort. There are so many women who are training and excelling now in the lower levels of wrestling and a lot of that is because they see there is a payoff, there is a place for them. Whereas, 10 years ago, when I was starting, there were very limited roles. That was when the Knockouts started. There were more roles and that was a big deal.

As far as starting it, I think that the Knockouts really had a huge role in that. It is kind of funny, in a way. Even though there are more spots available, there are more women going for those spots. We do have to be working even harder and be at the top of our game. I love it because it creates competition among us and within ourselves to be the best.

Quick Hits – Justin Roberts compares time in the WWE to being like a love story, that apparently becomes a very abusive marriage. Brock Lesnar to open up RAW tonight. Austin Aries both happy and not over how the Cruiserweights have been handled.