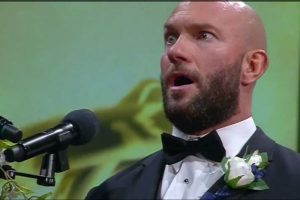 Braxton Sutter Speaks – The Pancakes and Powerslams podcast recently interviewed Impact Wrestling star Braxton Sutter. Here is what he had to say about Jinder Mahal winning the WWE Championship.

“I’m not a big believer in coincidence, and I don’t think it was a coincidence that we just happened to go India and film, it was a first-time-ever thing for an [American] company to [televise]. Khali ran shows there, but no one has actually filmed national television there. So, I don’t think it’s a coincidence that right before we went there to go film national television, Jinder [Mahal] won the title, and now, of course, [WWE] is going to try and head over there and jump on board.”

NFL Free Agent To Wrestle – Impact Wrestling has announced that NFL veteran and current free agent DeAngelo Williams will be wrestling at the Slammiversary Pay Per View on July 2nd. The press release states that he has not only been training for weeks but has also met with Impact Executives. His exact role and/or opponent has not been named. What do you think of this development? Are you all for the idea of another NFL star coming to wrestle for Impact (After Adam Jones…well…”wrestle” in his case)?