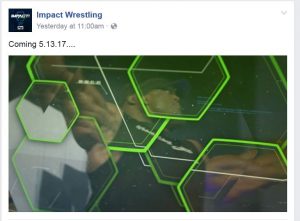 I waited for as long as possible to cover the news tonight, nothing really came about, so apologizes in advance.

Impact Wrestling Teasing Announcement? – Impact Wrestling has been teasing an announcement for next Saturday on various social media platforms. They’ve used Lashley, EC3, Rosemary, Suicide and others in these
“5.13.17” previews. Nothing has been added to their YouTube account yet. I’m thinking it’s one of two things, an announcement of a U.S. Tour, or a new, probably digital, wrestling show. Other ideas and rumors include the streaming service coming to the U.S., a new YouTube show, or a formal announcement involving the GFW/TNA merger. That might include new titles, a new “Impact” name, like maybe “Impact Global Wrestling” or “Global Impact Wrestling”. Not sure, I’ve heard nothing about this. It might be really big, or really minor.

Top Star Leaked – Charlotte Flair joins Paige and Seth Rollins as stars who had private photos leaked online. In a statement on Twitter, she demanded the stolen photos be taken down from the internet. While I sympathize with her, I have to wonder if she knows how the internet works.

Private photos of mine were stolen and shared publicly without my consent. These images must be removed from the Internet immediately.

Ex WWE Writer Had Great Ideas – Want to know why the WWE has terrible fucking booking? Because they don’t listen to great minds, like Kevin Eck. Eck is not only a former WWE creative writer but also the former Editor at WCW Magazine. He also wrote and covered pro wrestling during his time with the Baltimore Sun.

My idea was for Bryan’s plan to have AJ (Lee) committed actually succeed. We’d take her off TV for a little while before bringing her back in dramatic fashion. She would return with her new boyfriend (Ambrose), whom she had met while both were patients in the institution. Ambrose and AJ would wreak havoc, becoming WWE’s version of Bonnie and Clyde (or Mickey and Mallory, to use a less-dated analogy). Vince McMahon had a different vision. The WWE chairman and CEO loved the AJ character and decided to make her the new “Raw” general manager after she called off the wedding to Bryan. AJ as GM didn’t get over, and her run as an authority figure lasted just three months.

My idea began with former ECW star Tommy Dreamer being named the head of WWE’s scouting department. As someone who paid his dues on the independent scene and didn’t have the traditional WWE look, Dreamer’s goal was to give guys with similar qualities an opportunity. On “Raw 1,000,” Dreamer would formally announce Ambrose, Rollins and Ohno were now part of the WWE roster. They would go on to compete that night in a six-man tag match against three lower-card heels and go over in impressive fashion. After the match, Ambrose, Rollins and Ohno would call Dreamer into the ring, seemingly to thank him for what he’s done for them. Instead, they turn on him and deliver a brutal, three-on-one beat-down to the lovable veteran. On the following week’s show, they explain that they just used Dreamer to get their foot in the door in WWE. They say Dreamer wanted them to work their way up the card and do things the right way, but they’re not going to play by his rules. They reveal that their leader is someone with a background like theirs who knows success is achieved by any means necessary: Bryan (who was a heel at that time).

Rhodes and Goldust were a babyface tag team at the time, and I suggested we play off the fact the veteran Goldust was getting a bigger reaction from the crowd than his younger brother. Feeling that Goldust is hogging the spotlight, Rhodes turns on him and becomes Stardust. It’s revealed Brandi was the one who planted the seed in her husband’s mind that his brother was using him to stay relevant and keep him from becoming the star of the team. Brandi’s plan is for Stardust to become bigger than Goldust ever was, and she adopts a look and mannerisms that are reminiscent of Goldust’s former wife/valet, Marlena.

Josh Mathews Talks Losing Big Stars – Josh Mathews recently sat down with Sporskeeda and talked about what it was like to lose major stars and how the company copes with it;

You know, the wrestling business has always been…I won’t say a revolving door…there’s loyalties and things like that but…it’s just the way this business goes. You don’t stay in one place forever. Guys are going to test the waters at other places and see how that feels. Others are going to come and test the waters here, and that’s one of the most exciting things about being in the business that you have those opportunities.

Quick Hitters – Mark Henry had a great moment at the Spurs game last night, that saw the Spurs handle the Rockets (Go Spurs!) *Yes, I wouldn’t post this if it was any other team.*