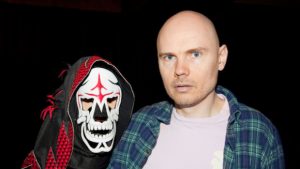 So after last night’s long drawn out DARE commercial on WWE television, I’m back in the drivers seat to tell you all about the first day of the week’s biggest news stories. So lets do this, Space Monkey Mafia.

NWA Purchased – While not confirmed as of yet, Billy Corgan has apparently entered into discussion to buy the National Wrestling Alliance library, name, trademarks and possession of the titles. As there is no core NWA affiliate/promotion anymore, there is no roster or “company” to officially purchase. There is no word on what will happen with the affiliates that use the NWA name, or the NWA on Demand streaming service.

Opinion: The NWA streaming service isn’t bad. If I had to guess, I think Corgan intends on launching a stream service promotion under the NWA banner, using the OnDemand status. While not what it once was, the NWA has survived the last decade and has found some notoriety, especially in Japan where the titles continue to be featured on major cards. Wrestlers like Santana Garrett, Davey Boy Smith Jr, Adam Pearce, Blue Demon and Impact Wrestling’s newest talent, Jax Dane, have all won NWA gold in the last decade.

Ken Shamrock Talks Lesnar – Say what you want, but Ken Shamrock sure isn’t shy. He did an interview with Hannibal TV and revealed he believes, in his prime, he was more than a match for Brock Lesnar, saying;

I can’t speak on people and why they’re using it. Listen, it’s not about bragging, being better than somebody, it’s about skill sets. There’s no question in my mind that the times I was in my prime I was the most well-rounded fighter out there. Or in the world. I was the one who knew how to kickbox, I did kickbox and muay thai, I competed in events in Japan, and I was a submission specialist. Going into the UFC for the first time, I was the most well-rounded fighter there.

Being able to fight a guy like Brock Lesnar who is a wrestler, who has very limited skills in striking, in my prime and him in his prime, he doesn’t have a chance. How can you beat me? You can’t beat me. If I’m in my prime and I have all those skill sets, and in his prime, he was very limited in his skill sets, how can you beat me? I’ve captured every title there is in the world that I’ve competed in. I’ve always risen to the top and become the guy. The only one I haven’t done that was in pro wrestling, the WWF. I captured Tag Team, Intercontinental, Rookie Of The Year, King Of The Ring, everything but the heavyweight title. I would hope that somewhere down the road all the differences would be but aside, and allow me to come back and at least get a shot at the heavyweight title, and I hope Brock Lesnar has it cause I’d like to come after him.

Sean Waltman Update – Sean Waltman had apparently gone missing after no-showing an event this weekend but his podcast co-host, Kevin Undergano revealed he spoke with Waltman, and claimed Waltman was dealing with “issues” but is ok.