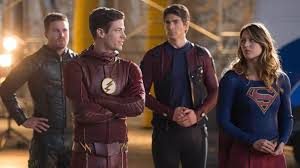 This is going to be a new thing. Instead of posting on Saturday, I’m moving the ComicCorp posting to Sunday. This way I can actually have a full day off.

Wonder Woman Controversy? – There’s a rumor going around, thanks to those twats up at uproxx, that DC and Warner Bros. is not promoting the “Wonder Woman” as well as other films. That’s actually untrue. According to various sources, the folks at Warner Bros. is actually spending more money on promotion for “Wonder Woman” than they did “Suicide Squad”. The lone bit of “proof” that the hack writer points to? The number of YouTube videos. Because we all now that matters, right? Websites like uproxx serve only to bait people. Don’t trust them.

Arrow Star Done? – The bow wielding vigilante is done. That’s right, the Green Arrow….’s most consistent threat, Malcolm Merlyn is done for the time being. This according to fans at a recent convention where the actor, John Barrowman, told the audience he was stepping away for a while. No word on if he’ll return or when, but apparently the deal he signed last year that saw him appear on three of the four Arrowverse shows was only for one season.

X-Men Re-Casting Major Character – The new X-Men Film: Phoenix will be shot under the name “teen spirit” cus jokes. One of the things that you might see in this film though is a new Rogue. According to Omega underground, there’s audition tapes of Rarmian Newton, Paul Mescal and Alexa Swinton reading for the roles of Shane, Sam and Marie. Rogue’s real name is Anna Marie. Coincidence Yes, probably.