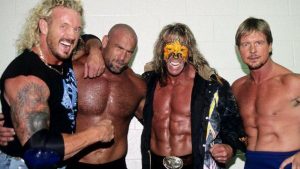 I’ll be honest with you here, if he wasn’t a murderous scumbag, there’d be another name on this list and we all know who he is. So we’re going to pretend he doesn’t exist.

That being said, this is my top ten favorite wrestlers from World Championship Wrestling. There’s a lot of wrestlers not on here that I thoroughly enjoy but I enjoyed what I enjoyed. That being said, you won’t’ find Mark Madden or Tank Abbott on here. Why? Because even as a 13 year old, I had great taste for pro wrestlers. 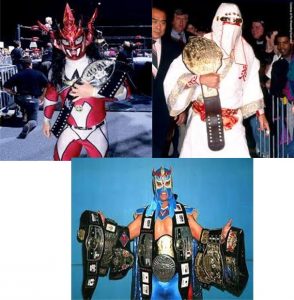 – I’m lumping all three on here due to their irregularity in appearances. Dragon really disappeared after 1997 for a variety of reasons, mostly injury. Liger wasn’t really seen much after 1996, and Muta was regularly irregular, having popped up in the early and mid 90’s as well as in 2000.

Ironically enough, despite most of them wrestling at the same times, they very rarely competed against each other, or even swapped the same titles. Ultimo Dragons won the Cruiserweight and Television titles twice, with Muta winning the NWA Television and WCW World Tag Team titles, and Liger winning the old Light Heavyweight title. It’s pretty remarkable.

Dragon took on Liger once, which was awesome, Muta vs. Sting is always a treat, and watching Liger or Dragon take on Rey Mysterio was always a treat. 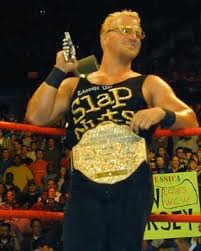 – Jeff Jarrett is certainly one of favorites. He’s a hell of a worker, more exciting than Ric Flair, and able to drag great matches out of the likes of Kevin Nash. The reason he wasn’t higher? Because his NWA-TNA/TNA/Impact Wrestling career doesn’t count. During his tenure in WCW he had shitty hair, shitty attire, then he was booked like shit.

He had a great ladder match at Starrcade 1999, and a bunch of fun bouts with Rey Mysterio and Booker T but for the most part Vince Russo used him to put over other talents instead of letting him be the guy.

He won four world heavyweight titles and three united states titles. He would go on to win another seven world titles after his WCW run. His Impact career was far more distinguished and his WCW career oh so minor in comparison.

– Call him what you will, but Clark was so much fun to watch. A true blue power guy that was dynamic looking and had a unique presence to him. Clark spent most of his early WCW run as a Mortal Kombat character-wannabe before he went on a super impressive run in the late 90’s. He ran through competition almost on the same scale as Goldberg, and there was even a rumor for a long time that the two were on a collision course.

Eventually injuries took their tole and Clark left the scene for a bit before returning in 2000 alongside Brian Adams to form Kronik, a pot-themed inspired, A.P.A. ripoff tag team. They talked about “breaking necks and cashing checks”, as well as being “baked” or “high” about various things. To keep the double entendre going, of course. He’d go on to win two WCW World Tag Team titles with Adams, but they never had a long run.

As for great matches for Clark, um…his matches with the Harris Brothers might be “the best”, due to them being viewed as equals. 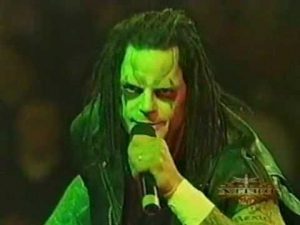 – I really liked Vampiro, especially in the pre-Russo 2000 era of WCW. Originally booked as a “Latin Heartthrob”, they let him find his real personality in late 99 with the iconic punk group, The Misfits. He was booked in a feud with Dr. Death Steve Williams, which in ’99 wasn’t too shabby.

In 2000, he would feud with Billy Kidman and then Sting before winning the WCW World Tag Team titles with the legendary Great Muta. Vince Russo never knew how to book him consistently, so he was never truly utilized like he should be. He would go back to Mexico after his run in WCW and have a solid career. He split times between AAA, CMLL and All-Japan Pro Wrestling.

Vampiro was bogged down by shitty booking in his WCW run but his match with Billy Kidman at SuperBrawl X (Superbrawl 2000) is pretty great. It really showcased what the two can do, and during a time when so many wrestlers either left or were hurt, it allowed them to truly be the attraction match.

Beyond the very successful gold rush of a career, Steiner was the best wrestler for a good four or five years during his early WCW run. Steiner in the early 90’s was second to none. Athletic, powerful, grappling; the true total package. Back and feet problems really hindered him as he got older, plus his increased muscle mass, but in 2000, he still had the WCW Match of the Year with Goldberg of all people.

A lot of matches that Scott Steiner as in, pre-1999 back injury, were fantastic. However, the aforementioned Goldberg/Steiner match was the tits.

– Besides the fun fact of Raven being a former Light Heavyweight Champion, Raven had a notable run in WCW near the back end of the 90’s, coming in during 1997. He was initially booked strong, with his Flock in tow. Wrestlers like Perry Saturn and Billy Kidman came from the group, and Kanyon was seen hanging around from time to time. He ended up engaging in feuds with Chris Benoit, and Diamond Dallas Page for the WCW United States Championship title before losing it to Goldberg.

Raven would go on to become the best part of the tag team division, teaming with Perry Saturn, now sporting a more goth-inspired look. Eventually he teamed up with Vampiro but quit the company prior to it going anywhere.

Raven seems to be the guy that really got hit the hardest by the WCW’s lack of removal of the older stars. While Diamond Dallas Page got a shot in 1999, Raven didn’t. Raven would of been the perfect foil for Page in the main event, especially if Page had kept the title through the summer instead of bouncing it around with Kevin Nash. Eventually Vampiro would of been paired with a new top heel Raven, but alas, that was not to be.

Raven’s most notable match in my opinion was probably the Slamboree 1999 triangle tag team match. Take a look. It’s awesome. 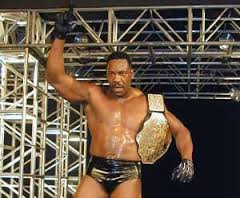 – While the Steiner Brothers were my favorite team of all time, Booker T was part of my second favorite tag team of all time, The Harlem Heat. Booker was a long time member of WCW, and really became one of the true pillars of the company, becoming a grand slam champion. He became a ten time WCW World Tag Team Champion, a six time WCW Television champion, a one time WCW United States Champion and four time WCW World Heavyweight Champion.

So he won a lot of things. If he had one career defining feud it’d be with Scott Steiner. Whether it was with Stevie Ray against Scott and his brother Rick, or if it was for the Television title, or even for the World Heavyweight title. But Booker had a classic best of seven with “He-Who-Shall-Not-Be-Named”, and along with Scott Steiner, was the only reason to watch WCW in the latter part of the 2000.

My favorite Booker T match would probably be against Jeff Jarrett at Bash of the Beach 2000, where he defeated Jeff Jarrett for the WCW World Heavyweight Championship. It’s an infamous night, with an infamous opponent, but to see Booker T ascend to the top of the mountain by going over the “Chosen One” was a sight to behold. If only Vince Russo booked him better.

– Fun Fact: Dean Malenko was the reason the Four Horsemen came back in storyline, so he’s pretty awesome. Malenko is easily, against anyone, ANYONE, the best technical worker in the history of the company. He was so damn good, for so damn long. Malenko was a stud. He even carried David Flair, who was green as Soylent Green, to a mediocre match.

The four time Cruiserweight Champion, a one time United States champion, and a one time WCW World Tag Team champ, with a fellow Four Horsemen member. On top of all of this, he carried most of the Cruiserweight division from 1996-1998. The dude was a stud, and had amazing matches with just about everyone from Mysterio, to Ric Flair, to H.W.S.N.B.N., to Dragon and Chris Jericho.

Jericho’s feud with Malenko was also responsible for, what I believe to be, the loudest reaction per capita I’ve ever heard. When Malenko took of his mask, that crowd popped, and it proved that Malenko was a goddamn star.

– Didn’t win a lot of titles, but did win two US titles, a world tag team title run and a world title win, obviously. A triple crown champ, somehow. Goldberg was a lot of fun to watch, because he was a walking atom bomb. The dude blew up everyone he faced, and even out wrestled William Regal once. Seriously, watch the match back. Goldberg totally reverses the shooting-Regal. It was marvelous. It happens at least three times in the match, and while Regal got his shots in, for a green-horn, Goldberg held his own.

But he did have great matches that were booked. The Steiner-Fall Brawl match was fantastic, obviously. Hell, even if the Bret Hart Starrcade match was solid. The best though, it obviously goes to Diamond Dallas Page at Halloween Havoc 1998. In what should of been the end of the streak, Page and Goldberg battled through a brutal and hard fought fight, with Page finally hitting a Diamond Cutter out of a Jackhammer. If that had been Goldberg’s first loss, holy crap, that would of been GLORIOUS.

The thing that really hurts Goldberg though is that he missed a bulk of 1999, a lot of 2000 (and was booked poorly), and missed two of the last three months of 2001. He was like Bo Jackson, an amazing talent who couldn’t stay active due to injury. He’d eventually come back in 2003 for the WWE but he was never booked as well.

– He won the Television Championship once, the World Tag Team Titles three times, two United States Championship wins, and NINE World Heavyweight championships. He was the man. He also won some minor tournaments and secondary crowns, like the Battle Bowl. He even won the Europe Championship Cup too, twice.

The titles though were second to his consistency. He was the top guy in the company during his first five plus years, there, and then moved to the upper-mid card when Hogan came in and dominated the main event scene. Despite Hogan wrestling less than 80 days a year, it still fell on Sting to main event the events, something he did with pride. We all know about Sting becoming the Dark Savior of WCW and becoming a huge draw, but what people fail to realize is, he was on Hogan’s level in drawing power for a while after.

His list of matches that were classics are as long as they are noted. So some personal favorites are his tag team match with Lex Luger against The Steiner Brothers at SuperBrawl, his title win over Flair at Great American Bash 1990, literally any match he had with Vader and his match with Rick Rude at Spring Stampede 1994.

A legend, to the core.