“You don’t turn your back on Family, even when they do”

Now I know what you’re saying, those two quotes are both from ‘Fast & Furious 6’, and you’re right, but to me those quotes specifically speak to the overall meaning of this spectacle of a now global franchise that along the way has made us laugh, cry, yell, and certainly leave us plain speechless. And it was demonstrated just as much in what is the fast paced, high octane, and even emotional thrill ride called ‘The Fate of the Furious’.

I’m sure if someone would’ve told me and the now millions of fans along with the actual cast in 2001 when this all started that seven films later it would become one of the most popular and highest grossing franchises of all time, with a fan base as loyal to the films as the characters of them are to one another, that person would have likely been called insane. Today however, they’d be dubbed a genius, or a hell of a guesser. Regardless facts are facts and in the immortal words……..of Jay Z, “Men lie, women lie, numbers don’t,” and the sheer figures these films have made speaks louder than any voice ever could.

What started off as a simple story around the lives of street racers by day, truck jackers by night has evolved into epic adventures with cars still very much at the center with faces both old and new on far grander scale than anyone could have ever thought possible that could put the biggest of theme parks to shame. In F8 we find ourselves not long after ‘Furious 7’ and just when it finally seems like our favorite racers can finally settle down for good, a new threat rises that breaks our favorite teams foundation upon which it has always stood when they are forced to face off against the one person they could’ve never prepared for, the man who lives his life a quarter mile at a time, Dominic Toretto(Vin Diesel). 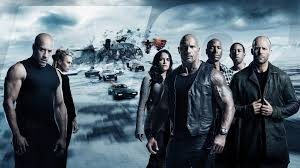 After everything we’ve seen these character go through you would think that nothing could tear them apart at this point. However as you will see with the films main antagonist, Ciper, brilliantly portrayed by the beautiful and talented Charlize Theron, all actions have consequences and sometimes the deadliest enemy is the one you never see coming, like a viper patiently awaiting the perfect moment to strike. Now not to delve into heavy spoiler territory as I’m a firm believer that people should go see and judge films for themselves. But like the mindless explosions for explosions sake we’ve come to expect from Transformers movies, F8 sticks to what brought it to the dance while keeping the true core of the film being the connection and relationships between the characters we have been with all this time, a element that at times has met if not surpassed the over the top jaw dropping action. Just for kicks, for true blue Power Rangers fans out there, imagine if “Turbo: A Power Rangers Movie” could’ve even been a third of just one of the last four furious films.

Highlights: First and foremost, the action, duh. Along with great callbacks beginning to literally the very end with dialogue, characters, and action from previous films that fans will appreciate. Diesel gets to show a different side of Toretto while very much bolstering the hulking, muscle car loving, never give up attitude, near superhero esque qualities that have made him a pillar of the franchise. This is shown off best in the opening scene where the phrase “pedal to the metal” is fully highlighted, giving fans a back-to-basics element that was missed in ‘Furious 7’. Toretto’s deepened relationship with love of his life now wife, Letty Ortiz(Michelle Rodriguez) is both refreshing and heartwarming, and grounds the movie. Dwayne Johnson performs as Luke Hobbs like only he can and even displays shades of his real life self and his wrestling persona. Tyrese Gibson may very well have tapped his best performance as the lovable but sometimes annoying Roman Pearce. Theron puts forth a villain as menacing mentally as Toretto is behind the wheel, and she reminds you of it every step of the way. And last but certainly not least, Jason Statham’s Deckard Shaw returns and delivers in spades, specifically his interaction with Hobbs, a relationship that fills a very noticeable gap, but one that may leave many fans wanting a spinoff around these two in the future.

Lowlights: Piggy backing off the dynamic between Hobbs/Shaw, obviously Paul Walker(R.I.P) is missed far beyond the realm of this film, but despite the cast doing an all around great job, and even with a mention the absence of Brian O’Connor is widely felt throughout the film, most notably with Toretto. It’s simply an irreplaceable real chemistry that made an unforgettable duo. Now clearly no film is perfect and neither is this one, in fact you ask some people and they will probably call this franchise as a whole the utter antithesis of perfect. However, if you’ve stuck around since 2001, you know what you’re getting into with each release. Critiquing any of them at this point like they are suppose to be Oscar worthy may be even more over the top than some of the action(just in “Furious 7” alone) and simply a waste of time in my opinion. These films have carved out a clear formula and it has proven to be a billion dollar one.

As a fan who’s been with these characters since the very first film, I appreciate the time, commitment, effort, blood, sweat, surely tears, and even conflict it has taken to get this far, and I think the fans’ overwhelming response time and again is the ultimate representation of that respect. Whatever people want to say make these films work or don’t, regardless I’m just glad to have them and while “Fast & Furious 6” remains my favorite, I thoroughly enjoyed this one. Seven is the number of completion, and thankfully the cast and crew found a way to deliver a formidable eight film. Even with some wondering just how long this franchise will go, and if it does will it go into space(not a joke), to think that is even a possibility, absurdity aside goes to show it really is in a league all its own.