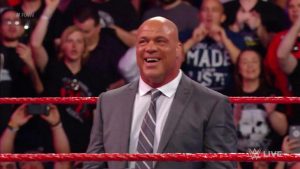 Kurt Angle Speaks – One of the newest members of the WWE Hall of Fame, Kurt Angle, was recently on Chris Jericho’s “Talk is Jericho” Podcast about a multitude of subjects, including how Chris Benoit was the only man to match his intensity. Here is what he had to say…

“He was, he was. I never had anyone match my intensity the way he did. He was always there, blow for blow, it was just like a mirror. I was wrestling me. Actually, I picked up my intensity when I was working with Chris. But it does kind of suck that a lot of those matches are kind of forgotten, especially Royal Rumble (2003). It just had everything. It had submission trade-offs and this was, I mean, I would see Dean Malenko and [Jericho] do it, trade-off, here and there, in WCW, but this was really the first time and the whole match was based on it. … I’m sorry, but he has got to be in the top three of all time. I mean, you can’t deny that. I mean, even Bret Hart will tell you that. I’m not going to excuse any of the things Chris did outside of wrestling, but when he was in that ring, he was possibly the greatest of all time.”

It really is something to see their matches from The Rumble ’03 and WrestleMania X-7, I hope we as fans can continue to remember them cause we sure know WWE won’t.

Raw Women’s Division Update – Sportskeeda is reporting that the current plan for the WWE Raw women’s division after the recent WWE Superstar Shakeup is to focus on Sasha Banks moving towards the summer. The Superstar Shakeup saw Charlotte move to Smackdown, while Alexa Bliss and Mickie James moved to Raw. According to the report, the current plan is for Sasha Banks to turn heel on Bayley over the summer and then win the Raw women’s title at SummerSlam.

Before that, Bayley is expected to defend the belt in upcoming feuds with Alexa Bliss and Nia Jax on Raw. Additionally, Emma recently made her return to TV for the Raw brand, and she’s expected to feud with Sasha Banks next. The report also mentions the feud could bring in Dana Brooke as well. I personally like heel Sasha Banks…well I just like Sasha Banks in general so this move will be good for her, but my biggest hope is that she will get a meaningful title run. Look at her last runs, won it at the 1st Raw of the brand split and lost it at SummerSlam. She then won it back but lost at Hell In A Cell. Then won it back again but lost it at RoadBlock. Let’s hope she holds onto the title for more than a month.

The Elite Take Shots At JBL – The Young Bucks and Kenny Omega have released a new “Being The Elite” video where they The Bucks take a shot at JBL for blocking them on Twitter. JBL has recently been in the center of controversy over allegations of bullying and harassment of other WWE workers, including Justin Roberts, Mauro Ranallo, and numerous others. JBL has also been noted as blocking a lot of people on Twitter who are showing support of Justin Roberts or Mauro Ranallo.

In the clip, Nick Jackson is standing behind Matt, but intruding in his way. Matt is being blocked then states “hey you’re blocking me for no reason, just like JBL did…”, they then look at the camera with smirks on their faces.

That made me giggle