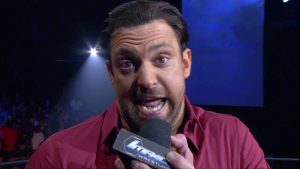 Oh boy, what a busy day. We have a new WCW, check out the photo to find out who (if you don’t know), and we have a few new reviews on the tumblr page. Links to that to the left. Lets blast off Space Monkey Mafia.

Aron Rex Update – Despite reporting this weeks ago, news finally came around the last 24 hours thanks to a statement that confirmed what we reported; Aron Rex is done with Impact Wrestling. His gimmick was not widely liked, and there were apparent segments that never aired. Rex was another Billy Corgan hire, and Rex and Jeff Jarrett decided to mutually part ways. Rex has said nothing but good things about his time in Impact though.

WWE Star Quits – It was reported earlier today that Simon Gotch was done with the WWE. He tweeted out an email to contact him on, and seems content. The word going around is that Gotch had requested and received his release, thus putting Aiden English in limbo, his former tag team partner. Gotch has plans to continue wrestling going forward.

WrestleMania Match Cancelled – The Observer claims that we had a second Cruiserweight match on the show, and would of featured a six man tag match. The decision was time related, despite having only 13 matches on a seven hour show.

ROH Talent Gone – The day of departures is still going strong. Ring of Honor and Taeler Hendrix revealed that she was done with the company and thanked them for her time there. No word was mentioned on what her plans for the future are.

Quick Hits: The Hardy Boys have been given the go-ahead to finish their indy dates. Word is the WWE requested they tone down if not stop the Broken gimmick while doing so. Nikki Bella claims that she and John Cena will not have kids, cus he doesn’t want them. Shinsuke Nakamuar and Tye Dillinger debut on SmackDown.