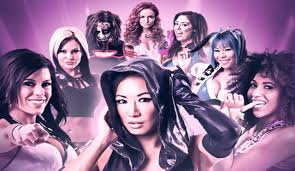 This isn’t conversation of who out of ten, but who out of two is number 1. It’s down to Angelina Love and Gail Kim and if you’re surprised by that statement, you’re not paying attention to the history here. For nearly a decade the Knockouts have had a “women’s revolution” going in full force. They didn’t need a married couple to decide to hop on a bandwagon, they decided, with the most misogynistic booker in modern memory on the staff, to put out the best women’s wrestling one could find on television. They did this by building around two women, who we’ll get to eventually. Until then, here’s the top ten. Like the tag team division, these are the homegrown stars of the Impact Division.

Honorable Mention:
Velvet Sky – Velvety Sky gets a spot on this list strictly because she was one-half of the Beautiful People’s original lineup. She’s not very good on the mic and a shit worker. But relevant is relevant.

Christy Hemme – Christy Hemme would of made it higher on the list but her in ring career was cut short due to a traumatic neck injury. Despite this however, Hemme moved backstage and began working with the division behind the scenes.

ODB – It’s hard to think ODB is a hall of famer. She’s to Impact Wrestling what Brutus the Barber Beefcake was to the heyday of the WWE. She’s a great gimmick, and solid in ring worker. Though she never was the face of the division.

Cheerleader Melissa – Cheerleader Melissa might be the best worker on this list not named Gail Kim. She spent her time in TNA/Impact Wrestling as Awesome Kong’s handler and as a competitor as Alisha Flash. A longer run, and a few title wins would of made her a top of the list contender.

– While Madison Rayne has always been in and around TNA/Impact Wrestling, even to this day, the facts are that she’s not always delivered as the head of the division. She’s got the titles to boot, third all time in title wins, and second in time as champion, but she’s not a very memorable champion. Her most noteworthy moments came with Angelina Love, after Love got booted from the Beautiful People and with Gail Kim, upon Kim’s return in 2011. 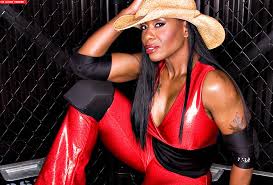 – One of two women to never win the Knockouts title on this list, the WWE Hall of Famer was a cornerstone in TNA for most of the early years of the Knockouts Division. Originally debuting in 2004, Moore’s run didn’t start in earnest until 2007 when she sided with James Storm against Gail Kim and Petey Williams. The two women would feud for most of the winter and spring, leading to the first ever women’s cage match at Lockdown 2007, that Kim won. She would stick around for the next two years as a manager and wrestler, mostly associating herself with Beer Money, and wrestling on occasion. Jacqueline’s match with Gail Kim was a test at the time, one to see if the two women could deliver in the ring on a high level. The match allowed TNA to move forward with plans to launch the Knockouts Division. Without her, who knows if we’d have the Knockouts today.

– While Taryn may look down on pro wrestling, she had a fairly impressive run as Knockouts Champion. She was set for a major run with the title after defeating Gail Kim in a Last Knockout Standing match but ended up getting pregnant and missing over a year of her career to recover and get back into ring shape. Over a year-plus later, Terrell would finally pin Kim to capture the Knockouts titles. Despite her singular win, she’s got the longest reign in Knockouts history, and is fourth all time in combined days as champion. Again, all with a single reign. Terrell had a few high profile matches but her sudden departure near the end of her run hurt her chances of placing higher. 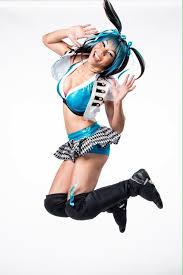 – Jade, like the next woman on the list and Taryn, won the Knockouts title only once and didn’t have a lengthy run with the belt. However her “Red vs. Blue” feud with Rosemary helped keep TNA relevant and interesting in the latter half of 2016 and at the start of 2017. Jade had a plethora of strong matches during her two plus run in the company, highlighted by feuds with fellow Dollhouse members, Gail Kim and Sienna. While her run was short, many fans have hope that she’ll return to the company. 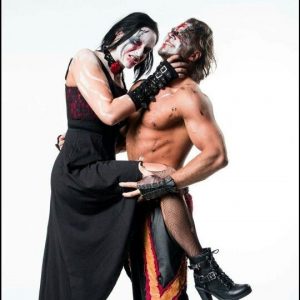 – From the Blue in “Red vs. Blue” to the Red, Rosemary was just as pivotal as Jade during the same above mentioned time period, but unlike Jade, Rosemary was the centerpiece of the feud with The Hardy’s and her group The Decay. Her involvement made those matches a lot more interesting, as three of the four men have issues bumping at this point in their career. Rosemary was also usually the most entertaining villain in the Broken Hardy’s segments, outshining everyone she was put across from. Considering her consistency and in ring abilities, here’s hoping she re-ups with the company. 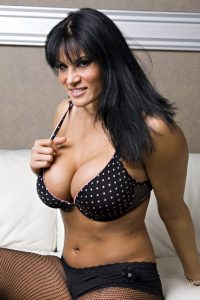 -Traci Brooks is another woman on this list to have never held the Knockouts championship but she was a long time member of the division long before it even existed. She, Trinity and Goldy Locks represented the original trinity of the division. She eventually moved onto managerial work with Matt Bentley, whom ironically enough got his big break tagging with Brook’s future husband, Frankie Kazarian. Brooks would spend the back portion of her career switching between “Knockout Law”, a referee, and various other backstage and in ring roles. While Brook’s isn’t the most dynamic wrestler, her participation in many major moments like “Cookie-gate”, as well as managing the likes of Bobby Roode, she’s more than carved out her place on this list. 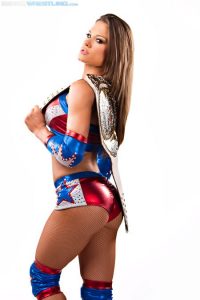 – Brooke Tessmacher is known for much more than her booty-shaking talents. One of which is her ability to have major title bouts with just about anyone. Winning the belt from Gail Kim in her home state of Texas, Brooke proved herself as a true talent in the company. She started off in TNA as Eric Bischoff’s assistant, and quickly emerged as one of the more popular Knockouts in the company. Like Madison Rayne and Taryn Terrell, Brooke missed time too due to a pregnancy, and like both of them, returned to the company. Tessmacher returned to Impact Wrestling this year as part of the new regime, and is positioning herself to be one of the top veterans in the division. If anyone can continue dishing out major matches, it’s Brooke. 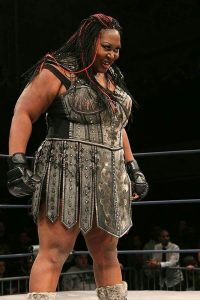 – Kong is known as the most physically dominating wrestler in the history of Impact Wrestling. She’s had several stints with the company, that ended each time after she became physically violent backstage with…well…unpopular personalities. In the ring though, Kong and Gail Kim established the division with brutal and violent matches. Kong has had major showcase matches with Gail Kim, Taylor Wilde, and even former Impact Wrestling Knockouts champ, Havok. While Kong has had a serious of misadventures in her career, her tenure in TNA will forever be defined by her ability to put on fantastic matches. 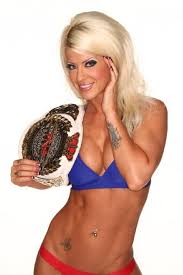 – It’s hard to deny Angelina Love’s impact on the company, no pun intended. Love formed easily the most relevant and impactful all-women’s stable in the history of pro wrestling. The group had four full time women’s members (and Kip James/Billy Gunn), including Velvet Sky, Madison Rayne and Lacey Von Erich. The group won a plethora of Knockout and Knockout Tag Team championships during their existence, and Love and Sky became the poster-women for TNA’s Knockouts Division during Gail Kim’s absence from the company. Love was always one of the better heels in the ring, and what hurt her from taking the top slot was quality of matches. Love could carry her own, but very few of her matches would ever be considered “match of the night” material. Unlike #1. 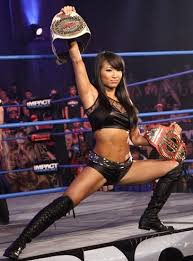 – Gail Kim is number one with a bullet for many reasons. She’s tied with Angelina Love with 6 Knockout Title wins, as well as a Knockout Tag Team title win with Madison Rayne. She’s had match of the year candidates with Brooke Tessmacher, Taryn Terrell, Jade and numerous others in the division over the course of the company’s history. Kim is currently unsigned but still is complimentary of Impact Wrestling on Social Media, even crediting them with launching the real women’s revolution, and not the WWE’s Triple H or Stephanie McMahon. Many fans, much like with Jade, hope Impact Wrestling and Gail Kim come to terms on a new deal so we can see more of her. In the mean time though, the greatest Knockout of all time is pretty happy at home with her husband, celebrity chef Robert Irvine.