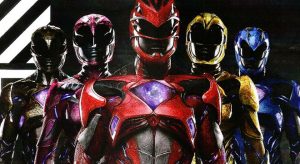 Well, well, well….. Here we are once again. For those of you who are long time readers here at NerdCorp, you know who I am and you know that it’s been one hell of a long time since I’ve written anything for the site. But for those of you who are new here, allow me to introduce myself. My name is Swisher, and I’m a bit of a vet here at NerdCorp. Used to write weekly columns and talk a lot about wrestling here, but lately I’ve been so busy that all I’ve been able to get out have been the sporadic podcast (Hypothetical Life, coming to your earholes soon again in the near future). But fret not, for I have returned under the new banner, and we’re here to talk turkey about a reboot of something that defined my childhood: Power Rangers.

Power Rangers is an American entertainment and merchandising franchise built around a live action superhero television series. Produced first by Saban Entertainment, later by BVS Entertainment, and as of 2015 by SCG Power Rangers, the television series takes much of its footage from the Japanese tokusatsu Super Sentai, produced by Toei Company. The first Power Rangers entry, Mighty Morphin Power Rangers, debuted on August 28, 1993. Saban’s Power Rangers (or simply Power Rangers) is a 2017 American superhero film based on the team of the same name, written by John Gatins and directed by Dean Israelite. It is the third film of the Power Rangers film franchise, and is a reboot that features the main characters of the original Mighty Morphin Power Rangers television series, portrayed by a new cast. The film stars Dacre Montgomery, Naomi Scott, RJ Cyler, Becky G, Ludi Lin, Bill Hader, Bryan Cranston and Elizabeth Banks. In the film, Zordon (Cranston) recruits five high school students to form a team that must stop an alien threat led by the witch Rita Repulsa (Banks).

So now that you’re reacquainted with myself, and you’re refamiliarized with the Power Rangers franchise, let’s cut to the chase. This movie is freaking gold. The casting is phenomenal, the storytelling is A-1, the CGI and production value is off the charts and the movie itself is just so amazing from start to finish. I went and saw the movie Saturday night with two friends who were also huge Ranger fans like myself when they were younger, and they also loved it. It offers something for everyone, young and old, new fans and long-time fanatics. 2017’s Saban’s Power Rangers is a fantastic movie and let me tell you why.

Let’s start with the casting. Dacre Montgomery as Jason Scott/Red Ranger. The leader of the Power Rangers and a noted prankster/screw-up. Montgomery portrays Jason to a tee. The jock with a heart of gold and he’s not afraid to step up to the plate when he has to, but he has shortcomings and isn’t afraid to admit it. Naomi Scott as Kimberly Hart/Pink Ranger. Former Angel Grove High cheerleader and Jason’s love interest. Scott was tasked with taking a vain character who’s made a huge mistake and now has to own up to it and is finding a new lease on life within the Rangers and her new friends/teammates. Scott does a very good job of making you care about her characters subplot, not to say that every other actor/actress doesn’t do that with their respective Rangers.

RJ Cyler, who might be my standout performer of this movie, plays Billy Cranston/Blue Ranger. The movie takes a turn away from the original MMPR by casting Cyler, who is African-American, to play the originally Caucasian Billy. They also revealed that Billy is on the Autism spectrum and a lot of humor doesn’t resonate with him and he has other traits that help represent people who also are on the spectrum. Cyler is amazing and I think for a lot of people, will definitely be their all-star in this movie. Becky G is Trini Kwan/Yellow Ranger, the Latina and LGBTQ member of the Rangers. Becky is tasked with portraying a character struggling with coming out as Lesbian as well as being isolated and distanced emotionally from her own family. Becky G finds away to pull at your heart strings and makes you feel for Trini and she’s just very good.

Ludi Lin plays Zack Taylor/Black Ranger who is Asian-American and bilingual, and is dealing with his mother’s illness, and that his mother is the only family he has left. He’s facing being alone, being all by himself, and finding new family in the Rangers. Bill Hader is the voice of Alpha 5, the robot assistant of Zordon, voiced and mo-capped by Bryan Cranston, who is the mentor of the Rangers and the original Ancient Red Ranger who is now trapped in the Morphing Grid. And finally, Elizabeth Banks as Rita Repulsa, an alien witch and the original Ancient Green Ranger who has gone rogue and is now searching for the Zeo Crystal on Earth in an attempt to gain more power and control of the Morphing Grid.

The cast is phenomenal and as much as I’ve always been a fan of the Red Rangers and the MMPR’s White Ranger, RJ Cyler and his standout performance as Billy Cranston makes him by far my favorite character. But good characters don’t make for a great movie or TV show alone. While quintessential, a well-built universe and captivating story are also required. You’d think Saban’s Power Rangers would have the universe part nailed, and be able to fall back on the expanse that is the Power Rangers Universe. But this movie is essentially a restart for the entire series, hence the word “reboot”. So with the cast nailed down, a brand new introduction to the world of Angel Grove and all its happenings is required.

Angel Grove is a fictional town in California that is basically the Earth’s epicenter for the galactic equivalent of a World War. It houses the Power Coins (emblems that allow the Rangers to connect to the Morphing Grid and the source of their powers), and the Zeo Crystal, a powerful tool that powers the Morphing Grid and can potentially destroy all life on Earth, if not the universe. So your small town universe is set, your characters are all there… What now?

Now you write the story of 5 unlikely teens from different walks of life (A brain, a jock, a princess, a criminal/delinquent, and a basket case, go figure) who come together to defend their small town from an ancient alien witch. Overcoming their personal obstacles and differences to learn that alone, they’re weak and fragile, but together, they’re stronger than ever and nothing can destroy or come between their friendship.

Wrap all that up with some well-placed cameos, amazing CGI, and a kickass soundtrack/score and you have yourself an early summer blockbuster. Logan was amazing, Get Out and Split had me on the edge of my seat, and Beauty and the Beast had me almost in tears, but Power Rangers was all of those things wrapped into one and is my early contender for Best Movie of 2017. The Zords vs Goldar alone is worth the money to see this movie. There’s character development, there’s a deep lore to this universe, and there’s so much room to expand. Haim Saban is a billionaire with pockets so deep that they’ve slated 5 more Power Ranger Movies for the future already, and if they all live up to this one, I will be in the theater on opening night for every single one.

If you have kids, if you’re a long time fan, if you like action, comedy, or drama, or you just like good movies, go see Saban’s Power Rangers. I’m pretty sure I’m gonna see it again, and when it becomes available on DVD/Digital, I’ll add it to my collection. Power Rangers is an early contender for what could be the best Superhero movie all year, and you will not regret seeing it. To wrap it up, I’d say I give it 4.5/5 stars. While there’s little left to be desired, Power Rangers is not perfect. They could have done more to build the lore of the universe, to make you more emotionally invested in the characters, and to pull you into the story all that much more. But for what it’s supposed to be (kid-friendly action-comedy superhero movie), it does one hell of a job. My hat is off to you SCG, Haim Sabin, John Gatins and Dean Israelite.

So, with all of that being said I hope I sway some of you to go see it. It’s well worth the watch and it’s just a very fun movie. As for me, I’ll be back hopefully soon to bring you more Hypothetical Life podcasts and more of these Let’s Talks. I’ve got plenty to say about movies, comics, and video games, and even more to say about Pro Wrestling. You can also find me on twitter @Swiiisher and you can find my tumblr here. So for now I will simply bid you adieu, and until next time, I’ve been Swisher, for the NerdCorp, keep on keeping on, folks!