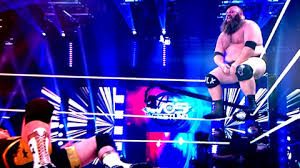 Slow news day. Alex Swisher has a great column up about the current Power Rangers movie. Check it out. Space Monkey Mafia, lets do this.

Goldberg Done? – Goldberg thanked his fans prior to his match at WrestleMania 33, and said some interesting things about whether or not he’ll be around post-WrestleMania in an instagram post. You can read it below. I don’t think Goldberg is done, but I also don’t think he’s committed to returning just yet.

Call it luck…. hard work……or fate. Still trying to grasp the moment from last night. Thank you to all the fans who’ve welcomed me back during this run. Truly an honor to have my family along for the ride this time! #humbled #grateful #priceless #familyfirst The biggest #thankyou goes out to my wonderful wife who has put up with me during this time. Also quite important is that none of this would’ve happened without the @wwe giving me the opportunity. #thankuall #teamgoldberg BTW , if you think I’m throwing in the towel you know nothing about me. Expect all hell to break loose at #wrestlemania no matter what I’m going out on my sword! If I got 1 or 50 left I’m bringing the heat!!!! #bankonit

Impact and WOS Press Conference – The two wrestling promotions held a major press conference in England today, and uploaded it onto their YouTube channel. WOS Wrestling and Impact Wrestling brought in a local politician, a rep from ITV, Jeff Jarrett, Jeremy Borash and the entire WOS Wrestling roster. You can watch the whole thing below.

In the video, you see Nick Aldis, aka Magnus debut as part of the roster, as well as Impact Wrestling star Grado. Rumors have Rockstar Spud and Bram as also being wrestlers who could be going to the British promotion as well. Magnus is positioned to be a major name in that promotion, as he’s also the GFW Global Champion as well, and will undoubtedly be a top player in Impact Wrestling as well.

Justin Roberts Slams Vince’s Outlook – Vince McMahon doesn’t care what fans think. Duh, we knew that. But Justin Roberts, former WWE announcer, sat down with the Memorabilia Guy (whoever that is) and talked about this, saying;

When you do a live wrestling show you have a live audience telling you what they like and what they hate. Instead of appeasing the fans and writing the show the fans like, and believe me they have some of the greatest minds and talent in wrestling, they could put on a Wrestlemania every week. Like the attitude era. You watch it now and its really flat for three hours and once in while the crowd kind of like some of it. It’s not the talents fault. As an example, say the crowd really like Cesaro but the company wants you to like Sheamus so they are going to give you Sheamus until you like him in the same way you like Cesaro. Look at Roman Reigns, the company wants you to accept him, but if you like someone else, no you have to like who the company wants you to like. The fans aren’t getting a show that is catered for them, it’s catered to running with the guys who they want to push.

The higher-ups at that company are the sort of people who say, ‘You’re not going to tell us what to do. This is our company and we will run it how we want’ – that’s it. Wrestling fans are so loyal they will find one or two things every week that they like about a show, even if they hated everything else. Its unfortunate and I want WWE to thrive. I just want the fans to have great shows and the shows I had growing up. I loved wrestling as a kid because it was great, and I want it to be the same way for current fans. I want the business to keep going strong

Quick Hitters: Despite no one believing her, Stephanie McMahon claims she tried to turn John Cena heel. Shinsuke Nakamura didn’t like his theme at first. DDP claims Goldberg knocked himself out in their amazing Halloween Havoc match.