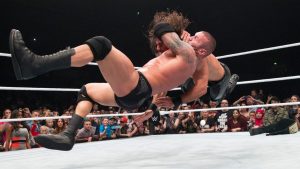 Hello all you doctors and wackos out there.  The asylum’s doors have been reopened to discuss possibly the most rampant plague of wrestling world: the finishing move.  Now don’t get lost in the sauce (Eli Drake = money), the finishing move is a crucial part of storytelling inside the ring. From Bruno Sammartino’s Bear Hug, the Von Erichs’ Iron Claw, and Dusty Rhodes’ Bionic Elbow to the Stone Cold Stunner, the Styles Clash and the Tombstone Piledriver, a finisher works on various different levels, which is probably why it is so prevalent. It helps bring the audience into the show and can bring a huge pop – like a well timed RKO out of nowhere – and it becomes a part of the wrestler’s persona. From a storytelling aspect, it normally symbolizes the climax of the match and can serve as either a wrestler’s last resort, the ultimate equalizer, or the final nail in the coffin. So for many reasons yes a finishing move is essential.

Now here’s where I spit in everybody’s soup.

This thought first occurred to me a few months ago. I was watching Ethan Carter III battling Eli Drake (I believe the stipulation being that if Drake lost he couldn’t speak for the rest of the year), which was a solid match up and one I would love to see again because their feud was all too short lived honestly. Now at one point in the match EC3 hit Drake with vicious attack, either a spinebuster or the TK3, and I remember thinking to myself “that was sick, but he’s not going to win since it wasn’t the 1 Percenter.” (For anybody who is unaware yes the 1 Percenter is EC3’s finisher) And that realization actually took me out of the action of what was a really good match. That’s when it occurred to me that the finisher actually acts as a double edged sword.

Now I will be the first to admit that I loved Kenny Omega vs Kazuchika Okada at WrestleKingdom 11 where we saw at least half a dozen of Okada’s Rainmaker lariats, and my favorite match of all is Undertaker vs Shawn Michaels at WrestleMania 25 which showcased each opponent’s finishers at least 3-5 times. However both of these matches took place at their respective companies’ biggest shows of the year where it is expected that as a competitor you pull out all the stops and leave everything in the ring. The idea that I am putting forward is that not every little match on an episode of Raw or Impact Wrestling (RIP TNA) or Ring of Honor should have to rely on a finisher to end the match. Just about any hold or maneuver can be considered devastating enough to end  a match if people have enough wherewithal to properly book a match, and that move that was used to end the match doesn’t have to later on become that wrestler’s finisher (see Daniel Bryan’s High Knee strike he used to beat John Cena for the WWE title). Over reliance on finishers diminishes what occurs early on in the match, making everything that comes before seem almost irrelevant.

It can be argued (and rightfully so) that the parts of the match preceding the finishing maneuver sequence are just as important, if not more, and serve as a build up to the climax of the match. And to that I say….absolutely. That is exactly how it is supposed to be if a match’s story is told properly by the men and women inside the ring. As with any story being told across any medium, a match should have a rising action and a well defined climax. I am sure that we all can think of a match that fell flat because it didn’t feel like it reached a proper conclusion.

What I am saying is that the proper conclusion of a match does not necessarily have to come from a finisher. Granted, there are those occasions where a wrestler sneaks out a win with a roll-up or a heel wins dirty, but what if after 10-15 minutes of intense competition someone pulled out the win with a vicious spinebuster or powerbomb or DDT? And what if that actually was the norm and the finisher became a move that occurred less frequently? If done correctly, this is an idea that could work on multiple levels. For one thing, it would elevate high impact moves like the powerbomb, spinebuster, powerslam, and DDT beyond the level of just set-up  or wear-down moves.  Instead they become far more devastating maneuvers that, on any given night, if a competitor gets caught with one it could put them away for the one-two-three. Not only that, but it makes the use of a finisher far more special, and gives it more meaning than just using it because that is how you have to end a match. Suddenly, if a match ends with a finisher, it gets this aura around it of this all out battle where neither competitor would back down and the only way it was able to end someone finally had to pull out their ace in the whole, their ultimate weapon they saved as a last resort. And then think how crazy the match would be if both wrestlers had to pull out their finishers.

Beyond these advantages, a wrestling world less reliant on the finishing maneuver would also see, out of necessity, more creative and innovative booking practices. We have seen countless times, whether on WWE or TNA or whatever promotion, the same match formula used over and over again because of the unwritten rule that everything in a match must lead to the finishing move and the subsequent pin/submission. And let’s be honest, a lot of the time even that formula isn’t executed well. Without the crutch of the finisher being the defacto climax, bookers and storytellers alike will be required to figure out new ways to end a match on a regular basis, not to mention having to devise new routes to take in order to arrive at the match’s finish.

Of course there are certain drawbacks, hang ups, and hesitations that go along with this idea. I will not deny that.  One big problem would be how to make the wrestler who lost to a non-finishing hold not look weak or like they were jobbed out. This could be a difficult obstacle to overcome given the current mindset of the wrestling business where finishers are not only expected but deemed necessary in every match. However the solution to most of these problems, as well as just about every problem facing any wrestling match or promotion, comes down smart booking and effective story telling in the ring.

–“Enjoy yourself out there. In the asylum.”