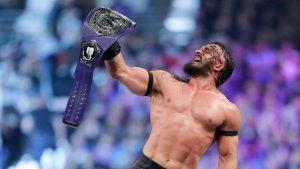 Since “The Man That Gravity Forgot” returned to WWE television back in December, his total change of demeanor, remix(slowed down) version of his theme, and more methodical and smash mouth in ring style has allowed him to evolve into the dominating self proclaimed “King of the Cruiserweights”.

When Neville landed on RAW in 2015, he captivated the WWE Universe with his jaw dropping moves, specifically the Red Arrow. Unfortunately when you’re as good as Neville, who’s near second to none in the ring, on a show like RAW you can easily get put into the “simply entertain us with your flashy moves, and nothing more” box. Case in point, big opportunity matches with the likes of John Cena, Kevin Owens, and Chris Jericho saw Neville come up short in valiant efforts time and again. But meaningless matches and feuds with mid-card mavens like Wade Barrett and Bo Dallas is where he’d see the most success, or sadly still lose in some cases.

After a prolonged period of stagnation on top of recovering from an ankle fracture, the Cruiserwieght Classic(CWC), and birth of 205 Live presented Neville with the perfect opportunity that he is fully capitalizing on. One of the best feuds in NXT history was between Neville and Sami Zayn over the NXT Championship. At the time Neville was known as nice guy that was an honorable fighting champion, but Zayn’s relentless pursuit towards finally attaining the gold saw Neville gain an edge with a “win by any means necessary” mantra. I say all that to say he never had attention drawing promo skills as he let his performances do the talking, but when the feud saw him develop heel esque traits,  he became far more intriguing. I heard of the saying “it’s good to be bad” but it clearly works better for some more than others.  In fact that may very well have been a prelude to this sinister side we see now.

If someone told me a year ago that I’d be looking forward to Neville promos, I most likely would’ve laughed it off. He was never horrendous on the mic but he wasn’t grabbing attention either. Honestly we were never given a reason to care about anything other then his incredible moves. He was literally turning into a new Evan Bourne in that it was all about his finisher. But him justifying his new attitude on the fact that he saw being left off of the one stage he truly could’ve shined as a last sign of disrespect and disregard for his undeniable  talent is one hundred percent believable.  With total commitment in this new role in every aspect of his game, he finally feels like a force to be reckoned with, but more importantly, a complete performer, one that he may have never been able to evolve into as just another guy on RAW.

205 Live has quite a wide variety of talent consisting of a lot of the talent we saw in the CWC. But now outside of that sport like tournament setting, there aren’t many guys who actually have a character. This is why guys with signature personalities like Neville, Brian Kendrick, Rich Swann, Noam Dar, and certainly Jack Gallagher stand out. And it’s because of this, and the fact that we’ve yet to see presentation and matches the caliber of what we saw in the CWC that has resulted in a lukewarm reaction from fans. However, at WWE Fastlane, Neville and Gallagher delivered what’s being regarded by a large number of those fans as not only the best match on said show, but the best cruiserweight match since the inception of 205 Live.

Of all the four Cruiserweight champions so far Neville has had the most defined and enjoyable run, and with names like Akira Tozawa on the rise and Austin Aries soon to debut for the brand, Neville will have the competition to hopefully garner the reception the division deserves. Because until someone can finally dethrone him, Neville will continue to reign over 205 Live and force all who oppose him to bend the knee, and bow before “The King of the Cruiserweights”.