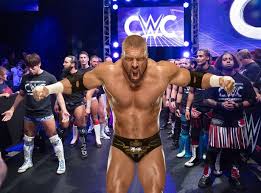 You can’t. You can’t save the division. Thanks to Impact Wrestling (TNA) and Ring of Honor, the idea of Cruiserweights not being able to compete with heavier wrestlers, or not being as profitable is gone. All major companies now utilize a crop of “crusierweights” in their main event scene. Wrestlers like AJ Styles, Kenny Omega and Eddie Edwards are all some of the biggest names in the business, and can all be viewed as “cruiserwegihts”.

So the fact the WWE is even attempting a weighted division, is, well, lame.

So how do we fix the show? Well, bolstering the talent is a start. Austin Aries, Noam Dar, Neville, there’s a solid crop of guys in the division to build off of. Just not enough to run a whole show off of. So there’s two options.

Scrap 205 Live! and just focus on the Cruiserweights being apart of RAW. You only need 6-8 guys then.

Firstly, lets drop “weight”. Call it the “Cruiser Division”. Make it your X-Division. You can also use names like “Infinity”, “Grand Prix”, anything that lends itself to dynamic and exciting. But for continuity and legacy sake, lets just say “Cruiser”.

So you rebranded the title and division, now lets rebrand the color scheme. Firstly, if you want to do your own show, that’s fine. Purple. Maybe add some green tint? But that’s just me. If “no” on the show, stop using the purple. The ropes make it look stupid, and you’re adding too much possibility of a ring rope error due to the hasty nature of the change over.

Now, the idea of the Cruiser-show existing I’m fine with. However, in order to get the most out of the show, you need to have ONE match on RAW and ONE on SmackDown to put over the show. That way it’s not “brand exclusive”. It also gives you opportunity to have classic Cruiserweight matches like we had on Nitro, that weren’t so much about the rivalry as it was putting on a show. That’s what you do here, you put Noam Dar against Kalisto, or Aries vs. Gallagher in a random match, just to hype up the formerly named “205 Live!” you give ’em a taste, and they come in for more.

BUT NEVER THE CHAMPION THOUGH. He can show up for commentary for the match, but that’s it.

Now, one big name you’re going to need to add to the show is Sami Zayn. He’s not a main eventer. He’s just not. He’s not being booked like one, he doesn’t look like one, and he never has been one anywhere else. Yes, he was in NXT, but that doesn’t count. That was about a hot brand that Zayn inherited.

So you move him to a show that isn’t as needed as RAW is in regards to ratings, and you can actually get some use out of him and maybe, just maybe be able to make him a marketable star. If he’s not losing every week, he has a shot, right?

I think “Clash” or something that has some alliteration would work for the new show. Bring up a few tag teams, like the Bollywood Boys and Ciampa and Gargano, make a few other solo stars into a tag team, and maybe even have “guest stars” like Xavier Woods or Kofi Kingston pop on every other week, and I think then, maybe, just maybe you’ll have a product worth watching.

Now that doesn’t help a lot of the issues right now. Over saturation is a problem, sure. However, the biggest problem is lack of character uniqueness. You need some dynamic names, and Zayn has some umph behind him, as does Austin Aries (who just recently joined the group), plus add maybe an Enzo Amore, an Xavier Woods, and a few other names and you’ll have a show worth watching.

Another idea would be to feature a Cruiser Tag Team title, that way you can have some crossover, like The New Day having Woods and Kofi winning them, while Big E and whoever wins another one. That’d really make the show stand out to some degree.

Really, anyone trying to do weighted classes in the U.S. anymore are finding it harder and harder to sell the concept. So, i think this is the best way to go, if I’m being honest.

There are some minor ideas as well, like pair the show with NXT and run them throughout smaller venues would certainly help the product stand out. However, one big issue with this is that NXT should specifically be for the crop of guys and gals who need polishing, not for ready made stars. In fact the WWE needs to stop doing that.

If someone, like Shinsuke Nakamura or Hideo Itami needs to work on English or promo skills; ok, that’s fine. But, why was Samoa Joe down there for over a year, wasting away? Why is Bobby Roode down there? What do these men have to prove? Are you so pathetic at creating new stars that weren’t made elsewhere, that you have to go to such great lengths to protect your brand? But that’s another argument for a different day.

There’s no real way to tour the brand, outside of doing what NXT does, which might work. No, not film in the same venue, but do a four hour taping, once a month with the talent in a smaller venue. This sets up a lot of possibilities, like for instance their ability to then tour, and appear on other brands to hype of their own product.

If you’re only trying to get 4-6 thousand people into the venue, then you’re not so worried about having huge names, or being tied to specific booking practices.

This leads us to the major shows. Firstly, there should only be two. I’m thinking somewhere in the 2.5-3 hour range, since you’re only doing two in one year, unlike NXT, which does at least four if not more.

So, what, and when, should these two shows happen? Well, good question.

The first show would be the Cruiser Classic. The tournament would happen throughout the show and build up to the event, which will happen in May or June. The second would be CruiserCade. It’d happen in December and have a striking resemblance to the Starrcade star logo.

These are the simplest and easiest ways to add some emphasis and importance to the brand. Again, I don’t know if these would work, but they can’t hurt the brand anymore than the WWE already has. So why not give these ideas a shot?